Acting coach tells what it takes to be a star

Acting coach tells what it takes to be a star 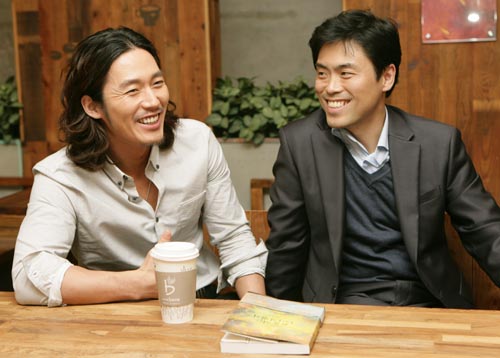 Acting coach Ahn Hyuk-mo, right, and actor Jang Hyuk, talk about what it takes to be famous at a recent interview with the JoongAng Ilbo. Ahn has published a new book on the subject. Provided by iHQ

They are drawn by the lure of what seems to be a glamorous life and the hefty paycheck that comes with it. But what does it really take to be a star, and how many people can actually get there?

Ahn Hyuk-mo, an acting coach for some of Korea’s most popular stars, says that being a celebrity is no fairy tale.

“You don’t wake up one morning and become Cinderella,” he said in a recent interview with the JoongAng Ilbo.

In his recently published book “The 12 Keys to Realizing a Dream,” he tells of the trials and tribulations of 11 of his students as they go from struggling actor to stardom, including Kim Sun-ah of “My Lovely Sam-soon” and Jun Ji-hyun of “My Sassy Girl.”

Ahn, a former actor himself, is also the director of C.A.S.T. by iHQ, an acting academy affiliated with celebrity-management company Sidus.

He said that all of the celebrities in his book were successful because they set very specific goals for themselves and had the drive to accomplish them.

Aside from these traits, it seems they had one other thing in common.

“Stars are born to be stars,” Ahn said, but added that they also need certain qualities to hone their craft. “Through patience and training, the true character comes out.”

But that’s just the beginning. Famous actors and performers go through a lot of practice and other hardship.

“First of all, the stars have to enjoy it - endless all-night filming and constant rereading of the script,” Ahn said. “It is only possible for a person to be a top star when they learn from this hardship and use what they’ve learned to support their work.”

All stars see their popularity fade at some point, said Ahn, but he noted that those who can continue to win popularity and fame are the truly skilled actors.

One of the featured celebrities in Ahn’s book is actor Jang Hyuk, who studied under Ahn for 14 years.

He seems to have learned Ahn’s lessons.

In the book, Jang is described as being relentless in his analysis of a character.

“It is easy to fail if you don’t understand the steps one has to take to be famous,” Jang said at the same JoongAng Ilbo interview.

Ahn cautions his students and the public against the idea that it is easy to be famous.

“Stars are major role models for children these days,” Ahn said. “But I want to dispel any myths about being famous and tell them about the qualities stars have to have to be famous.”