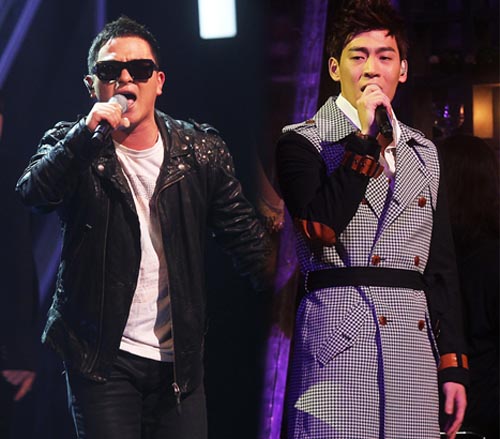 
John Park is a hunky student from an elite school abroad, who serenaded the audience week after week with his suave voice and stage presence. Hur Gak is a stout, homey-looking fellow who continued to impress the judges with his heartfelt renditions of soulful tunes from past and present.

The battle that brewed between the two in recent weeks turned “Superstar K,” a talent show on Mnet, into the most successful show in Korean cable-television history.

During the second-season finale on Friday, the underdog and local favorite Hur, a 25-year-old repairman, took home the trophy.

“I thank my father, brother and girlfriend .?.?. I want to have a bowl of ramen with my dad,” Hur said, tears streaming down his face, upon winning the 200 million won ($176,991) prize. He also won a car and will get the opportunity to release his own album.

Hur may not have realized it when he made the ramen comment, but his win has become a part of Korean television history.

Superstar K set a record for a Korean cable-television show on Friday, with a viewer rating of 18.1 percent, or 1.34 million people, according to AGB Nielsen Media Research. The singing competition’s success has given new hope to the broadcasting industry, which has long been dominated by the three major networks ? MBC, KBS and SBS.

The show’s popularity has also led top companies - including the show’s main sponsor, Coca-Cola, as well as Daum, Motorola and Lancome - to invest hefty sums in its production in exchange for product-placement deals.

Although the first season of Superstar K was a relative hit for a cable show - earning an 8.7 percent rating last year - this season’s ratings surprised even the show’s producers. 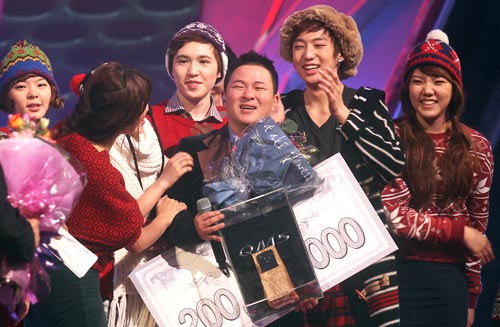 Hur Gak, center, holding his prize check, weeps on the finale of “Superstar K” as he is surrounded by other contestants. [YONHAP]


Huh and his rival Park, sang their hearts out for the top prize during the two-hour live broadcast from Kyung Hee University’s Grand Peace Palace in northern Seoul. Huh’s win was based on a compilation of the judges’ evaluation, real-time votes through text messages and online votes prior to the broadcast. Three superstar judges - singers Lee Seung-chul, Yoon Jong-shin and Eom Jeong-hwa - participated in the event.

The journey to the top was a long one for both finalists.

Before Superstar K, Hur repaired fans by day and sang at small events by night. Growing up with a single dad, he had to forgo high school to support his family. When asked what he would do with the prize money, he said he wants to buy a house for his father and twin brother.

On the other hand, the 22-year-old Park - ethnically Korean and a United States citizen - moved to Chicago with his family when he was in the fourth grade. He is an economics major from Northwestern University and appeared as one of the final 24 contestants on American Idol’s ninth season, which began last year and ended early this year.

Park’s enviable qualifications have given him the nickname “eomchina,” which is short in Korean for “my mother’s friend’s son” and refers to the kid your mother would always compare you to when you were young.

Park’s appearance on Superstar K stirred up controversy when Netizens criticized the show for allowing Park, a U.S. citizen, to compete for the grand prize.

Many pointed out the irony in Korea’s biggest talent show giving its grand prize to a non-Korean.

“John Park expressed to us that he wants to start his music career in Korea,” said a public relations official at Mnet.

She added that he had to sing Korean songs for his initial auditions “like everyone else,” emphasizing that Mnet did not give him special treatment because he had appeared on American Idol.

American Idol has dogged the Korean show since its inception. Criticized in its first season for being an American Idol wannabe, Superstar K made changes in its second season that helped it break away from its former image.

Superstar K’s head producer Kim Yong-bum said that this season, the show put greater focus on the contestants’ personal lives and the struggles of the competition, diverging from the strong, competition-based structure that is popular on U.S. reality shows.

But the show’s sudden success was not all positive. Some of the top 10 contestants have said that they were not prepared for the attention that comes with having their personal lives made public.

One contestant, Kim Gu-rim, confessed in numerous interviews that the toughest time in her life came after she was voted off of the show, when the public’s response to her attitude on the show - seen by some as self-centered - affected her and her family.