Gone for centuries, Choe scours the globe for Goryeo paintings

Gone for centuries, Choe scours the globe for Goryeo paintings 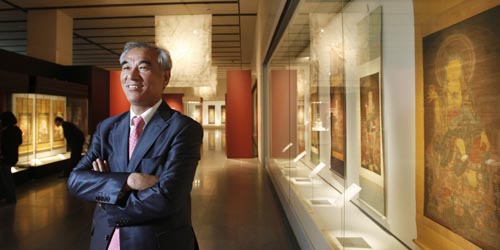 National Museum of Korea Director Choe Kwang-shik at the Special Exhibition Gallery, where “Masterpieces of Goryeo Buddhist Painting” is on until Nov. 21. By Oh Sang-min


When monks from Tokyo’s Sensoji Temple, in a break from tradition, allowed Choe Kwang-shik to see “Water Moon Avalokiteshvara” of the Goryeo period (918-1392), the director of the National Museum of Korea immediately gave three bows to the elegant bodhisattva in one of the most beautiful Buddhist paintings ever made. After viewing the painting, which is housed in the Tokyo temple, he bowed three more times for good measure.

Just months after Choe’s November visit, the Japanese temple officially agreed to loan the rare painting to the National Museum of Korea for its largest-ever exhibition of Goryeo Buddhist paintings, which is now underway at its Yongsan, central Seoul, location. The temple had seldom displayed the painting by the Goryeo monk Hyeheo to the public, even to Japanese scholars.

“In fact, I felt like making 108 bows, but I didn’t have enough time,” Choe, a devout Buddhist, said in an interview with the Korea JoongAng Daily.

According to Buddhist beliefs, humans have 108 mental agonies and 108 bows is a way to rid them from our bodies.

Now the museum’s Special Exhibition Gallery is filled with the muted buzz of appreciative crowds. A noticeably international audience views the paintings of Buddhas and bodhisattvas, including the Water Moon Avalokiteshvara, gleaming mystically under soft illumination.


Leaders of 20 countries will also view the exhibition “Masterpieces of Goryeo Buddhist Painting,” on Nov. 11, as the museum will be a dinner venue for the G-20 Summit.

The show, which began earlier this month, will go on until Nov. 21.

With elegantly flowing lines, elaborate details and graceful colors matched with luxurious gold pigments, there have been few large-scale exhibitions of Goryeo Buddhist paintings. Only a small number - approximately 160 pieces - remain in existence, and they are scattered around the world.

To put on the exhibition, the state-run museum borrowed 61 Goryeo Buddhist paintings from 44 institutions and collectors in Japan, the United States and Europe, as well as Korea.

In the interview with the Korea JoongAng Daily at his museum office, Choe talked about the stories behind the paintings and the museum’s future policies.


Q. How did you persuade Sensoji to loan out Hyeheo’s Water Moon Avalokiteshvara? 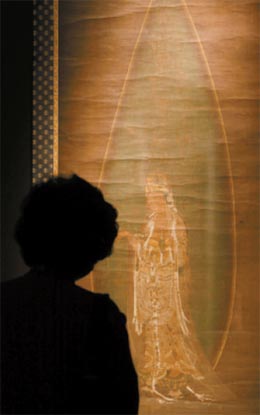 A viewer looks at the monk Hyeheo’s “Water Moon Avalokiteshvara,” a painting with which Koreans know from textbooks, but very few have seen in person because it is housed in Sensoji Temple, Tokyo. By Oh Sang-min

A. When I made the first request to borrow the painting, the temple replied that it would show it to me, but it would be difficult to lend it out.

When I went to see the painting, I bowed to it as I said. And then I told the temple officials how it is important that G-20 Summit leaders see its beauty and that Koreans see the country’s heritage, which they know only from textbooks since few have ever seen [the painting] in person. I also pointed out that today’s youth, both in Korea and Japan, are losing interest in Buddhism, and that the Goryeo Buddhist painting exhibition would help revive interest. Two or three months later, they finally delivered the decision to lend us the painting.

Which of the other paintings in the exhibition was difficult to get? Are there paintings that you wanted to borrow but failed?

When we asked the Tokugawa Art Museum [in Nagoya] to borrow a painting [“Amitabha and Eight Great Bodhisattvas,” now part of the exhibition] the museum at first refused to even let us see it, because it was not on display.

I told the museum officials I would go there anyway to view its other collection. When I arrived, they seemed to feel pressure to show me the painting. After seeing it, I persuaded them, saying that all the Goryeo Buddhist paintings scattered around the world would come together, so that the painting housed in the museum should not be left out. I also talked about the G-20 Summit. They finally agreed to loan three paintings - a better-than-expected result.

As for U.S. and European museums, it was not very difficult to borrow the paintings from them.

On the other hand, some Japanese temples did not agree to lend out their Goryeo Buddhist paintings, as they regard the paintings as their “Kami-sama,” which the god for the temple is dwelling in - and should therefore not leave the temple under any circumstances.

And some Japanese private collectors were very reluctant. They were concerned that Korean authorities might refuse to give the paintings back as they are Korean heritage. But the problem was solved as the Tokyo National Museum provided a guarantee. The museum gave us much help for this exhibition.

Do such concerns of the collectors suggest that some Goryeo Buddhist paintings overseas were illegally taken out of Korea? If they were, does the National Museum have any plans to bring them back?

About 130 of 160 Goryeo Buddhist paintings are in Japan. According to our supposition, some were gifted to Japanese temples in the late Goryeo period or purchased by Japanese legally, but others were plundered by Japanese pirates in the Joseon period (1392-1910) or smuggled out under Japanese colonial rule (1910-1945). The problem is that it is unclear when and how the Goryeo Buddhist paintings in foreign countries were taken out of Korea, unlike the Oegyujanggak books [which the Korean government has been demanding to be returned from France for nearly two decades].

As for the books, there is evidence that they were stolen by French forces in 1886 from the Oegyujanggak archive, an annex of the Joseon royal library on Ganghwa island. On the other hand, there is no such evidence about Goryeo Buddhist paintings overseas. So realistically, it is difficult to bring them back to Korea.

As most of the remaining Goryeo Buddhist paintings are overseas, isn’t it difficult for local scholars to study them?

Yes, it is. Until the early 1980s, when a Goryeo Buddhist painting exhibition was held in Japan, most Koreans had not even known of their existence.

The paintings had been mistaken for those of China and Japan in European and U.S. museums. Since then, local scholars have been studying the paintings, but with difficulty due to their locations. So some art historians have already told me that they are jumping for joy about this rare exhibition.

And we will hold the first large-scale international symposium about Goryeo Buddhist paintings on Oct. 28, the fifth anniversary of the museum’s relocation to Yongsan, with scholars from Japan, China, Russia and other countries. It will promote active cross-border studies on the paintings. We have also published a book with high-quality photos of the paintings so that researchers could refer to them. We are building a database of close-up photos of the paintings’ delicate details.

As part of efforts to lower the threshold for the National Museum since you took the office in 2008, the museum made the permanent exhibition galleries free in May. But there were concerns it could damage the museum’s finances and the people it might attract. What’s the current conditions?

There were three major concerns about the free admission, two of which you have already said and the other one was that it could damage private museums, which charge admission fees.

To prevent people from entering who do not intend to enjoy the art, we still require viewers to go through the process of getting tickets, though they are free, and leaving big belongings in cabinets.

As for the museum’s finances, it is my view that, as the admission is free, people visit the museum more frequently, and when they do, they tend to view more special exhibitions that charge admission fees and have tea at the museum cafes.

Our museum attracted 2.7 million visitors last year - good enough for 10th in the world - up from 2.3 million in 2007, before the introduction of the free admission. This year’s goal is 3 million viewers. It is more profitable to lead them to see special exhibitions and purchase food or cultural goods here rather than to charge admission for permanent exhibitions, which cannot be high anyway for a state-run museum. And as for the effect on private museums, I think more visits to and increased interest in the National Museum will spill over to private museums.

We are also seeking joint programs with national and private museums.