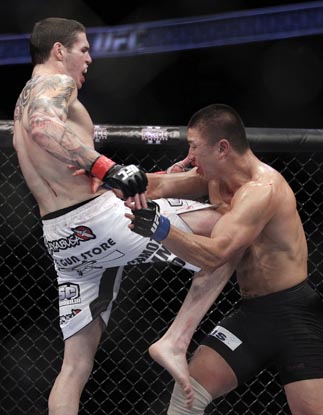 Chris Camozzi, left, lands a knee kick on Yang Dong-yi during a UFC match in Anaheim, California on Oct. 23. [AP/YONHAP]

Yang Dong-yi put up a valiant effort in his debut match at the Ultimate Fighting Championships, but came up short in his UFC 121 middleweight preliminary-card bout against American Chris Camozzi, losing by a split decision in Anaheim, Calif. yesterday.

The 26-year-old entered the match with a flawless 9-0 record, amassed mostly against Korean and Japanese opponents over the past three years. Listed at 181-centimeters (5 feet, 11 inches) and 85-kilograms (186 pounds), Yang lived up to his nickname of “The Ox” by being the aggressor and taking charge of the fight in the opening round.

The two fighters connected on several shots in the second round, but looked fatigued as the match wore on. With Yang on pace to earn a win in his debut UFC contest, Camozzi connected on a left-handed counter punch, which staggered Yang. Visibly fatigued, Yang failed to mount much of a fight in the final round.

The decision had two judges scoring for Camozzi with one scoring the match in favor of Yang. With the win, Camozzi improved his career record to 14-3.

On the main card, heavyweight champion Brock Lesnar failed in his third title defense and was upended by Cain Velasquez in the first round.