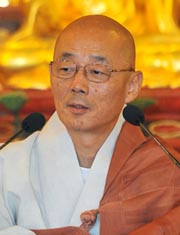 A long-running dispute between Bongeun Temple and the Jogye Order appears to have been resolved, with the head of the temple saying yesterday that he will follow the Jogye Order’s decision to manage temple affairs.

“I apologize for the conflicts with the other monks in the temple over the past seven months and for hurting Buddhist priests in the country,” Venerable Myeongjin, the head of Bongeun Temple, said in a meeting with reporters after a religious service yesterday morning. Ten reporters and 1,400 monks were present at the meeting.

“After I apologized, Venerable Jaseung [the Jogye Order’s administrative leader] said he was sorry for making a decision about the temple’s management without first consulting the temple’s leadership,” Myeongjin said.

The dispute between the nation’s most affluent temple and the country’s largest Buddhist sect started on March 11, when the Jogye Order decided it would manage Bongeun Temple, despite strong objections from the temple’s leadership.

After the decision was made, Myeongjin said on March 28 that Grand National Party Representative Ahn Sang-soo had pushed Jaseung to interfere in the temple’s internal affairs because Myeongjin was critical of the current administration.

The Jogye Order said on Oct. 12 that it would keep the previous management system in tact, but proposed that its human resources committee will be responsible for selecting the head of the temple. The temple agreed. Myeongjin will finish his four-year term on Nov. 13.

When asked if he thought he could be re-appointed as the next leader, Myeongjin said, “I will follow the decision of the Jogye Order’s committee.

“We [Bongeun Temple] promised that we will resolve this matter through discussion from now on.”

A new leader will be appointed next month.