The fan repairman who’s now a superstar of song

The fan repairman who’s now a superstar of song 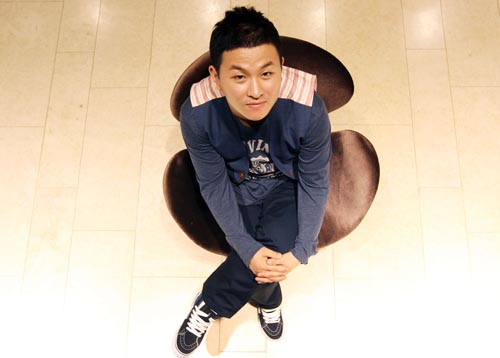 The broadcast earned an 18.1 percent rating, according to AGB Nielsen Media Research, the highest ever for a Korean cable network show and twice the viewership of the most popular terrestrial programs airing at the same time. More than 1.3 million votes were sent via text message for both Hur and competitor John Park.

Right after his dramatic win, Hur talked to the JoongAng Ilbo at CJ E&M Center in Sangam-dong, Seoul.


Q. What are your thoughts on winning?

A. I still can’t believe it. Truthfully, more than winning the competition, I am more delighted to have beaten John Park because he beat me once during the earlier audition process. I was also surprised that the judges (including singers Lee Seung-chul and Eom Jeong-hwa) gave me 99 points at the end.

You won by a landslide in the text message votes.

I think votes for me started to flood in after the semifinal show. I was able to show the public my continuous growth as a singer. If it was contest in a single show, I might have not been picked because of my looks. But because it was a long-running show, I was able to show the public everything I had. The advice that (singer) Lee Haneul gave me - not trying so hard to change my inadequacies but to push my strengths - really helped me.

Didn’t Lee Haneul predict that in the end John Park would win?

(Laughs) Well, John Park was always a big threat. Other contestants had various talents, including being able to dance or playing an instrument, but I only had my vocals.

You have been singing since you were 14-years-old. Tell us how you started.

I entered a singing contest when I was 14 and I won. I didn’t want to go to high school but wanted to pursue singing. My father opposed, but by the time I was 17, I was singing in shopping-mall events. If there were a lot of events like that available, I lived off the money I earned by singing. If not, I installed and repaired fans and also worked at construction sites.

So your main vocal training was through those events?

When I was younger, I would always watch singing shows on TV. One time, I won a singing contest in Incheon and then went to the finals, which were held in Seoul. I was shocked at how many talented singers there were. I felt like a frog in a small well. For two years after that, I worked on my singing like there was no tomorrow. I am grateful for my twin brother who gave me money to practice in noraebangs (singing rooms).

What does the Superstar K win mean for you?

The show saved me at a time when I thought I should quit singing. I realize now that you should never give up hope. Even if I didn’t win this contest, I probably would have sang well into my 30s.

You said that you wanted to buy a house for your father and brother.

I already handed over my prize money and car to my father. Us three men have lived together through hardship, and I think this is our happiest moment. It’s only the beginning. I’m taking Lee Seung-chul’s advice: I want to become a real performer.