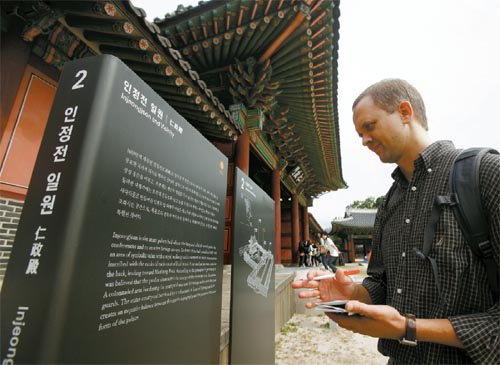 John Christopher Carpenter, a professor of journalism at Ewha Womans University, visited Changdeok Palace and the National Museum of Korea with the Korea JoongAng Daily to survey English language signs. By Jeong Chi-ho


People visit palaces and museums to get a feel for a country’s history, to enjoy a bit of beauty or to just slip into a different world. But when placards are mislabeled with confusing information, a pleasurable outing can become a frustrating experience.

The jewel among Seoul’s trio of downtown palaces is Changdeok Palace, which is known for its exceptional aesthetics. It is not the main palace in Seoul - that honor goes to the neighboring Gyeongbok Palace. But Changdeok Palace is the only Korean palace registered as a Unesco World Heritage site.

On my recent expedition to Changdeok Palace, I was accompanied by John Christopher Carpenter, a professor of journalism at Ewha Womans University and a former editor at the Korea JoongAng Daily. Carpenter, born and raised in the United States, has lived in Korea since 2005.

The first point of confusion at the palace is its name. In front of the main entrance gate, a tall red sign reads “Changdeokgung Palace.” Another sign nearby has both “Changdeok Palace” and “Changdeokgung.”

Gung means palace in Korean, and the above spellings follow the Revised Romanization system adopted by the government in 2000.

Inside the main gate, however, a gray stone sign is engraved with “Ch’angd?kkung Palace,” in accordance with the McCune-Reischauer system of romanization used by the government before 2000.

But such confusion is rather common in Korea. The Unesco World Heritage Web site uses both romanization systems, listing it as both “Changdeokgung Palace” and “Ch’angd?kkung Palace,” to please both the Korean government, which uses Revised Romanization, and academics, who mostly use McCune-Reischauer.

The use of both systems could be one reason for the different labels given to historic properties in Korea, but unclear direction from the government is another. 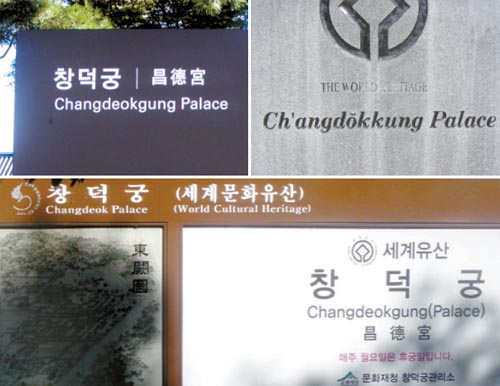 Changdeok Palace in central Seoul, a Unesco World Heritage site, is labeled in various ways in English around the palace grounds, creating the potential for confusion among foreign tourists. By Kim Hyung-eun

The Secret Garden, the palace’s main attraction, also has multiple labels. It is written as “Rear Garden” in the official brochure and as “Huwon,” its Korean name, on the Korea Tourism Organization’s Web site.

Carpenter argued for the importance of correct signage.

“Foreigners come here and read these signs. And it will be their very first impression of Korea,” Carpenter said. “It appears that [palace officials] are not aware of that, or the mind-set just isn’t there.”

At the ticket booth, there are multiple signs with information on viewing hours, guided tours, ticket prices and more.

The signs are written in a mix of Korean and Chinese, with very little English, so those without knowledge of either language have to use their imaginations to decipher their meaning.

Some items are obvious - numbers with a colon indicate time - but Chinese characters denoting months are more difficult to discern.

As we navigated the palace, we found that information signs about palace structures were quite satisfying and without serious errors, although we did have suggestions on how to make them sound more natural.

The signs were donated by the Arumjigi Culture Keepers Foundation, which promotes Korean cultural assets. The organization worked with the Cultural Heritage Administration to create new signs for all of the major palaces in Seoul and recruited noted historians, architects, designers and engineers for the job. The foundation even published a book in 2008 entitled “Why Palace Signs Changed” to document the process.

However, it wasn’t until 2007, a decade after the palace gained its World Heritage designation, that the signs got a major face-lift.

As we entered a cafe within the palace complex, we spotted a perplexing sign that read “Privily any food & drinks from outside is not allowed.”

Lee Eul-dong, a palace official, told us that the cafe and a nearby museum shop are not operated by the palace, but by the Cultural Heritage Foundation, which also operates Korea House, a royal-cuisine restaurant on Mount Namsan in central Seoul.

“It wouldn’t take a lot of effort to correct those mistakes,” Carpenter said. “Professionals with editing skills should be able to take care of the mistakes in a couple of hours. Thousands of people visit this palace every day, so we can imagine what results a two-hour investment could bring monthly, or annually.”

We also made a stop at the National Museum of Korea, which opened in Yongsan District, Seoul, five years ago.

Carpenter was skeptical about whether we’d find errors here, given that it is a relatively new institution. But we did find a few. In the lobby, Carpenter pointed to signs saying “No Cell Phone in Use” and “No use cell phone” as examples of awkward English resulting from literal translations from Korean to English.

We then strolled into a permanent exhibition dedicated to Joseon Dynasty (1392-1910) artifacts, which museum officials say is popular with foreign visitors. The exhibit takes up five halls and contains more than 400 relics.

Of the 13 major signs hanging on the walls, seven had errors. A 15th century stone base for a rain gauge was labeled “Instrument to measure of rainfall.”

But there is reason to hope that things might be different next year.

The Cultural Heritage Administration has entrusted a major translation firm called PanTransNet with establishing a database and standards for expressions used in English language signs for cultural properties.

The CHA will then enforce the use of these expressions with penalties on local administrative offices, something Korea has never done before.

“There have been many calls for such a move,” said Yun Gwang-yeong, an official at the administration’s policy division, in a recent telephone interview.

Yun, who worked with the Arumjigi Culture Keepers Foundation on the 2007 palace sign project, said that the CHA will hold seminars and public hearings with foreign experts and Korean citizens before the upcoming database is finalized.

According to Park Hee-sun, president of PanTransNet, her firm is currently surveying all 3,700 state-designated cultural properties.

“We have now compiled the different spellings used at home and abroad. We found that a single asset can be spelled seven to eight different ways,” she said.

Park acknowledged the difficulty of determining which spelling to use because all are usually valid to some degree.

She also acknowledged that there are likely to be disagreements, regardless of which spelling is chosen, because people have grown accustomed to certain spellings.

“Our goal is to create a comprehensive system, which we’ve never had,” Park said. “It would be hard to have perfect English signs everywhere. But currently, people are only about 20 to 30 percent satisfied with existing signage. We hope to bring that up to 70 to 80.”