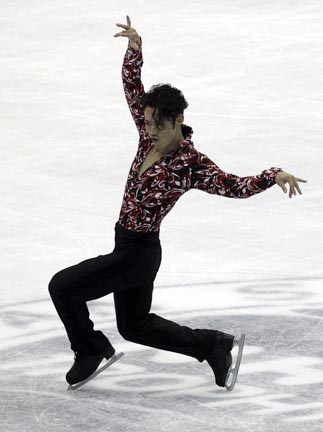 NAGOYA, Japan - The high-octane quadruple jump made a dramatic return to figure skating as world champion Daisuke Takahashi led a trio of Japanese to land the maneuver at the season-opening Grand Prix.

The spectacle followed a rule change that lessens the risk for attempting the four-revolution jump, which sparked a debate at the Vancouver Winter Olympics in February. The base value for the high-scoring “quad” remains higher, but the penalty for failing it has been reduced.

“I thought to myself ‘I won’t regret if I fail.’ I went flat out for the jump,” Takahashi, 24, said on Sunday after nailing a quadruple toe-loop to win the NHK Trophy in Nagoya, this year’s first Grand Prix event. His teenage teammates, world junior champion Yuzuru Hanyu and Takahito Mura, as well as Belgian Kevin van Der Perren had already completed quads.

“I didn’t want to be outdone after seeing them jump the quad just like that,” Takahashi said. “It’s a very good trend that Japanese and other skaters are trying it.”

In Vancouver, American Evan Lysacek won the gold medal without attempting the quad, beating Russia’s defending champion Evgeni Plushenko who opened his free skate with a daring quadruple toeloop-triple toeloop combination. Plushenko, unhappy with silver, expressed his dismay that someone who didn’t perform a quad was standing on top of the podium.

“It’s a fruit of the rule change that our three men landed a quad,” said Hidehito Ito, figure skating director at the Japanese Skating Federation.

The first skater to land a quad in competition was Canadian Kurt Browning at the 1998 World Championships in Budapest.