Ban says Korea to be bridge at G-20

Ban says Korea to be bridge at G-20 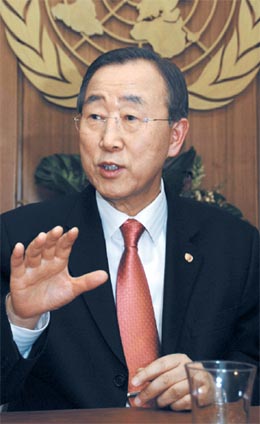 Bridging gaps in a divided world is traditionally the role of the United Nations, not of individual countries.

But according to UN Secretary General Ban Ki-moon, Korea will be taking on just that role at the upcoming G-20 Summit in Seoul, and he expects its efforts will succeed.

“I have full confidence that the Republic of Korea, as host country of the G-20 Summit in November, will play an excellent bridging role between the developing and the developed countries,” Ban said in an e-mail interview with the Korea JoongAng Daily to celebrate its 10th anniversary.

Ban said Korea’s standing and prestige are on the rise, thanks to the country’s democracy, dedication to market economics and hard efforts of its people. The war-torn, poverty-stricken nation of six decades ago is “truly becoming Global Korea,” he said.

Ban said the transformation was being carried out not only for Korea’s own benefit, but on behalf of developing countries as well.

In particular, Ban took note of Korea’s inclusion of “development” in the official agenda for the G-20, calling it a “highly commendable decision.” It is the first time the G-20, created primarily to respond to the 2008 global financial crisis, will address poverty and debt issues in developing countries.

“It will help the G-20 reflect the needs and interests of the non-G-20 countries in the process of G-20 decision-making and implementation,” he said.

Mentioning the UN Millennium Development Goals, policies to combat poverty and diseases by 2015, Ban said he hoped the UN would help Korea and the G-20 shape a development agenda and implement development projects.

In fact, the world’s 15th-largest economy, strong in shipbuilding, electronics and steel, is a relative newcomer to the donor club for the developing world.

According to the Ministry of Foreign Affairs and Trade, Korea’s official development assistance as a percentage of its gross national income is estimated to be 0.13 percent this year, lagging far behind other Organization for Economic Cooperation and Development members.

Still, Ban said, Korea is having an impact as a donor by giving countries lessons from its own history of overcoming poverty. Ban cited Korea’s “Knowledge Sharing Program,” which he said is already proving effective.

“I see huge potential that South Korea’s development model, stressing human resources and public-private partnership, will be successfully adopted in such places as Africa,” he said. “The fact that Rwanda has followed South Korea’s Saemaul Movement [a development philosophy] and is also showing the most excellent performance in implementing the Millennium Development Goals is no coincidence.”

Ban, who took office in December 2006 as the eighth secretary general of the UN, said his biggest achievements have been dealing with climate change, increasing efforts to protect “the most vulnerable people in conflict situations, particularly women and children,” and reforming the UN to bring more efficiency and transparency. “But all of these efforts involve tasks so large that they require continuous work,” he said, “and I am pressing ahead with all of them.”

On climate change, the world’s attempt to draft a new, binding climate treaty to replace the outgoing Kyoto Protocol is in trouble. A UN summit in Copenhagen in December 2009 failed to bridge the gap among countries, and upcoming talks in Cancun are expected to be contentious. The 1977 Kyoto Protocol expires in 2012.

“In my first years, I have focused on the threat of climate change, given the scale of the problem and the need to address it urgently,” he said. “I continue to work closely with world leaders to ensure climate change remains at the top of their agenda.

“Prompt, effective action is needed to reduce global greenhouse gas emissions, protect the world’s most vulnerable populations, and catalyze low-carbon prosperity for all,” he said.

“I am in favor of Green Growth,” Ban said. “I believe South Korea should promote green growth, and should help to play a positive role in the Cancun summit this December.”

In the interview, Ban also discussed the situation on the Korean Peninsula at a time of heightened tensions between the North and South.

Ban said he is “very concerned” that the situation has worsened because of the sinking of South Korea’s warship Cheonan in March. Ban, however, said he still believed diplomacy could succeed in bringing peace and stability, especially the six-party talks to dismantle North Korea’s nuclear weapons program. The talks have been stalled since April 2009.

“We have a path towards a verifiable denuclearization of the Peninsula through the Six-Party process,” he said.

“I am convinced that inter-Korean dialogue and cooperation would be restored in a mutually beneficial way, that there will be more understanding of each other.”

Ban has 14 months left before his term ends. He said apart from climate change and the Millennium Development Goals, he will focus on preventing and resolving regional armed conflicts as his top priorities for the remainder of his term.

“The world needs more dialogue, more tolerance, mutual respect and understanding, as well as more respect for a human being,” he said.

Asked about a second term, Ban declined to comment, saying that was an issue for the membership to decide. “My job,” he said, “is to do my job in such a way that it would speak for itself.”