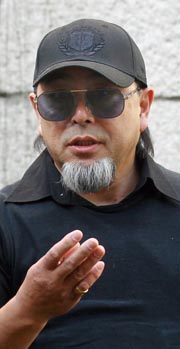 Kenji Fujimoto, the 63-year-old Japanese author of the tell-all memoir “I was Kim Jong-il’s Cook: True stories from the Dear Leader’s onetime chef,” said Sunday that any attempts by Kim Jong-un to open up North Korea would take at least a decade to put into action.

Fujimoto, escaped North Korea in April 2001 after spending 13 years as Kim Jong-il’s personal chef, shared memories of Kim’s youngest son and chosen successor during an exclusive interview in Seoul with the JoongAng Ilbo.

“It will be difficult for Kim Jong-un’s opinions to be implemented in [government] policies for at least five to six years,” Fujimoto said. “Even if his father Kim Jong-il dies, the focus will be on Jang Song-thaek, Jong-un’s guardian.”

Although Kim Jong-un’s power is expected to come slowly, Fujimoto said: “It is not surprising at all that Kim Jong-un was tapped as successor. There is nothing but dynastic succession for that country if it is to continue existing, and there is no other alternative than Kim Jong-un.”

The chef also discounted any chances of a possible power struggle between Kim Jong-un and his older brother Kim Jong-nam, 39, who lives outside North Korea. But he did express astonishment over Kim Jong-nam’s recent interview with the Japanese press.

“He said he was against a third-generation succession and even went on to call North Korea ‘North Korea’ and not ‘the DPRK,’ which is what Kim Jong-il dislikes the most,” said Fujimoto.

Fujimoto also doesn’t foresee any friction between Jong-un and his 29-year old brother Kim Jong-chul. “Jong-chul is kind and he will support his younger brother, not attack him.”

Jong-chul is the second son of Kim Jong-il, and was apparently passed over to become the next leader because he was too “soft,” or effeminate.

Kim Jong-un’s exact age is not known because North Korea has falsified his age to make him appear older and gave him a birthday that connects him to his grandfather. He is believed to be 27. Fujimoto also dismissed the legend that Kim Jong-un has been able to hit any target with a gun since he was three years old.

“I went shooting with Kim Jong-un when he was 17 and he couldn’t hit every mark,” the chef said. “But he loved basketball and played every waking chance he got. Kim Jong-il instructed him that he had to rest for 45 minutes after eating, but Jong-un couldn’t wait five minutes and would say, ‘Let’s go play.’”

Added Fujimoto: “His chubby appearance is probably from eating a lot. In North Korea, those with power at the top cannot be thin,” hinting that Kim Jong-un put on weight deliberately on Kim Jong-il’s orders.

“He has also always been at the center of groups and he has truly received Kim Jong-il’s DNA,” Fujimoto said. “If I was a father, I would have selected him to be my successor.”

There have been rumors that Jong-un is ruthless and intolerant, which the Japanese chef denied. Kim Jong-un is not a dangerous figure, he said, and the sinking of the South Korean warship Cheonan was “probably not his direct order.”

Some analysts thought the Cheonan sinking in March was ordered by Jong-un to burnish his military credentials before being named successor. Fujimoto said he hoped Jong-un would improve North Koreans’ lives.

Fujimoto left a wife, son and daughter behind when he fled North Korea in 2001. His family was reportedly sent to work in a mine, and in the interview Fujimoto apologized to his family. The chef took part in a conference hosted by Open Radio for North Korea.