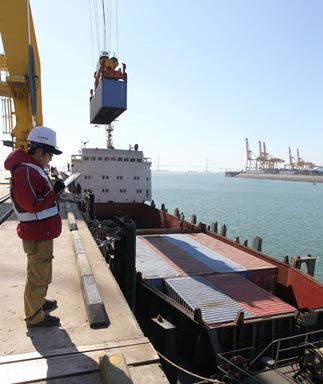 Instant noodles and aid supplies are loaded onto vessels in Incheon for shipment to North Korea. The supplies are part of a humanitarian aid package prepared by the South Korean government and the Red Cross for the flood-stricken North. [YONHAP]

Things are looking better for relations between South and North Korea this autumn, with the first shipment of humanitarian aid in more than two and a half years making its way out of the country yesterday.

The aid package was prepared by the South Korean Red Cross.

According to the Ministry of Unification, 5,000 tons of rice and 3 million cups of instant noodles left ports in South Korea late yesterday afternoon, bound for Dandong in northeastern China. The aid will then make its way to the border city of Sinuiju, North Korea, where torrential rains caused severe flooding in the region beginning in July. A promised 10,000 tons of cement will be shipped this Friday. Aid shipments are expected to be completed sometime in December.

North Korea requested aid for its flood-stricken citizens in August, and the South Korean government sent a positive response in September.

The Unification Ministry said yesterday that it spent a total of 13.9 billion won ($12.4 million) on the humanitarian aid package, with 8.6 billion won coming from the inter-Korean Cooperation Fund and the remaining 5.3 billion won taken from government funds.

To ensure fair and easy distribution, the rice was sent in 5-kilogram (11-pound) packages marked with the Red Cross emblem and the words “Donated from the Republic of Korea” in Korean.

Although the Lee Myung-bak administration has thus far maintained a hard-line stance on its North Korea policy, the government also approved a rice aid package of 203 tons last month from a humanitarian group.

Yesterday’s shipment was the first form of government-financed aid sent to the impoverished North since President Lee took office nearly three years ago. With nuclear talks on the rocks and North Korea refusing to yield on its nuclear program, cross-border relations took a turn for the worse in March with the sinking of the Cheonan, a South Korean warship. Seoul has accused North Korea of the attack, while the North has denied involvement.

More exchanges between the two Koreas are to happen later this week, with Red Cross working-level talks scheduled today and tomorrow in Kaesong. At the talks, North and South Korea are to discuss humanitarian issues, such as increasing the number and scale of family reunions to reunite those who were separated during the Korean War.