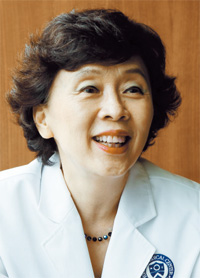 Professor Park Kyung-ah is set to embark on a new challenge. The 60-year-old professor in the department of anatomy at Yonsei University’s College of Medicine was chosen as president-elect of the Medical Women’s International Association during the organization’s 28th International Congress in Munster, Germany, in July.

Park has been serving as head of the Korean Medical Women’s Association since April and will become the president of MWIA after serving as an assistant to the current president, Professor Afua Hesse from Ghana.

Under the MWIA system, a president-elect serves as an assistant to the president for three years before officially moving assuming the top post. Park will be introduced as the incoming president at the MWIA 29th International Congress in Seoul in 2013.

Park has devoted her entire life to medicine.

Na played an instrumental role in the founding of the KWMA and served three terms as president of the organization. Park was exposed to anatomy at an early age. She has childhood memories of following her mother to the anatomy laboratory and spending a significant amount of her leisure time there.

“My childhood playground was my mother’s laboratory and anatomy classrooms,” she said.

Park was born in 1950, the year of the
outbreak of the Korean War. She does not
remember her father, Park Jung-kyu, a pathology
professor who was kidnapped and
taken north by the communists.
Having witnessed first-hand the tragedies
of war and ensuing poverty, Park also knows
the importance of foreign aid to nations in
dire need. Park is determined to lead the
KMWA in overseas aid missions starting in
February.
Q. How do you feel about your new
appointment?
A. Dr. Choo Il-ok, the 22nd president,
was the first Korean to be named president-
elect at the 21st International Congress
in Seoul in 1989. Korea was just starting to
gain international attention with its rapidly
developing economy then. The status of Korea
as a whole and its influence in the MWIA
has greatly improved over the years. It’s now
time for Korea to take a more proactive approach
in the international community.
The MWIA was founded in 1919 but is
relatively unknown to the general public.
What are the association’s goals and
aims?
At the time of the founding of the MWIA,
female doctors were few in numbers and had
to endure severe discrimination from their
male counterparts. The MWIA was founded
to create an international network with the
goal of improving working conditions for female
doctors. As an international non-governmental
organization, MWIA represents
female doctors from five continents. The
KMWA was founded in 1956 and joined the
MWIA in 1958. Severe gender discrimination
toward female doctors in Korea was commonplace
at the time. Back then, female doctors
in training were prohibited from deciding
on a field of their choice during their
resident training. While women now make
up more than half of the residents, many of
the senior members in popular fields like
plastic surgery, dermatology and ophthalmology
were adamant in their stance not to
accept women until recently.
What will you focus on once you are officially
named the president of MWIA in
2013?
In underdeveloped countries, sexual
abuse cases are being committed without any
consequences. I want to play an active role in
providing medical aid to the victims. We are
also working to improve patient care for domestic
sexual abuse victims. We held a training
session with 120 female doctors on how
to treat such victims in early September. In
the past, all sexual abuse victims were sent to
one of several state-run police hospitals
around the country. However, with an increasing
number of victims over the years,
victims can now be treated at any hospital.
But lack of experience or guidelines on how
to deal with such victims is a problem for
doctors. We plan on expanding training and
educational seminars to all regions of the
country and will form a network among female
doctors to create guidelines for how to
better treat sexual abuse victims.
Overseas medical aid efforts figure to be a
big part of your three-year tenure. Can
you elaborate?
In the past, the MWIA did not have the
means to carry out effective overseas medical
services, but we are now capable of carrying
out such missions and also have many volunteers
willing to participate in the program. I
was born during the tumultuous years of the
Korea War. I know very well the type of help
we received from foreign doctors. For example,
Scandinavian doctors laid the foundations
for the National Medical Center in Korea.
In another notable case, doctors from
overseas set up hospital ships to provide
medical services and to train Korean doctors
and nurses since it was difficult to build hospitals
in Busan. Korea received a lot of aid in
the past but has since developed into a country
that is now capable of providing help to
countries in need. KMWA will start its overseas
medical services aid in places like Bangladesh,
India and other countries in Southeast
Asia in February.
Your parents and your husband are medical
scholars. Is there a particular reason
why you chose anatomy as your area of
focus?
Exposed to the field at an early age, it was
interesting to learn every miniscule detail of
the human body. I was deeply interested in
the study of muscle tissue and nerves and
how they work in relation to each other
through dissections. At the time, there weren’t
any professors specializing in the field of neuroscience
so I thought there was huge room
for development of the field in Korea. My
mother was the same way. We’re both less
interested in the clinical side of medicine and
more interested in passing on our knowledge
to students. That’s why I became a neuroscience
professor.