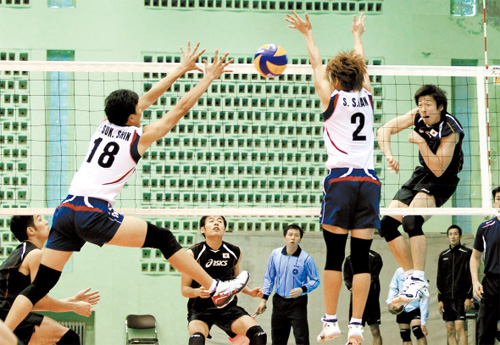 Shin Young-suk, left, and Han Sun-soo attempt to block a spike from a Japanese player during an exhibition match between Korea and Japan at the National Training Center in Taeneung, northern Seoul, on Monday. [YONHAP]


In a preview of what could turn out to be a medal-round game at the 2010 Guangzhou Asian Games, the Korean national volleyball team is hosting its rival Japan in a three game exhibition at the National Training Center in Taeneung, northern Seoul.

Korea and Japan have played two of three four-set games, with the final match taking place today. Japan won the opening match on Monday, 3-1 (25-20, 25-20, 25-17, 22-25). Having finished last in the 2010 FIVB World League tournament, the 16th ranked Korean squad defeated 12th ranked Japan twice on their home soil in the final qualifying matches in late August to secure a spot in the 2011 FIVB World League.

The exhibition matches serve as a tuneup for the two squads as they prepare for the Asian Games in Guangzhou, China next month.

“The Japanese national team got in touch with us to see if we’d be interested in playing some exhibition games,” Shin said. “We welcomed the chance to play against our rivals. I think Japan is looking to redeem itself for its two losses against Korea in the 2011 World League final qualifying rounds.”

In the first two games, Korea showed it had problems serving and receiving, but head coach Shin Chi-yong did not sound concerned. With Choi Tae-woong and Kang Dong-jin out with injuries, Monday’s exhibition was the first time the current 12-man roster played together in a game.

Korea is gunning for its third consecutive gold medal at the upcoming Asian Games, but will have to do it with several key players out with injuries.

“We need time to adjust against teams with quick offenses,” Shin said. “We won a set today. We will win two sets tomorrow and will win the final match.

“Choi Tae-woong has been replaced by Kwon Young-min, and Kim Yo-han was also late in joining the squad to replace Kang Dong-jin. We’ve only had a full 12-man roster for three days now. It’s frustrating but we have to prepare for the Asian Games in 15 days.”

Shin said his men are roughly 70 percent ready at the moment. Having held a recent overseas training camp in France, the national volleyball squad looks to be on its way to compete for its fourth-consecutive gold medal.