Cassette players walk on into history

Cassette players walk on into history 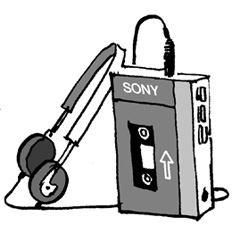 If you were young in the 1970s and ’80s, you probably remember the cassette recorder. Big as a backpack, it was part radio, part cassette player and it was all the rage. People could use it to record their favorite songs off the radio and then listen to them whenever they wanted to. At a time when record players with fancy trademarks were classified as luxury goods, cassette recorders made music accessible to everyone. This is how the “cassette-tape generation” came to be.

The cassette tape, which was developed by Phillips in 1963, experienced its golden age in the 1980s. When Sony made a little portable device called the Walkman in 1979, music moved from the confines of one’s home to all over the world. Young people everywhere latched onto its light and compact design, and the profile of a man jogging along a boulevard with a Walkman strapped to his waist and headphones over his ears became a ubiquitous image in films at the time.

At one point, imports of the Walkman to Korea were banned. But that did not stop people from sneaking the devices into their luggage. Little by little, domestic manufacturers started to produce minicassette players that imitated the Sony Walkman. The streets of Seoul were gripped by Walkman fever. The device not only changed consumer life, it also created conflict between young and old. Parents scolded children for wearing headphones at their desks, saying: “How can you concentrate on studying if you keep listening to music?”

But it was too late. The Walkman had become an integral part of our lives.

The Walkman was a hit product with sales of more than 200 million, and today it is in the dictionary as a common noun.

But with the advent of the compact disc, the age of cassette tapes and the Walkman began to fade and the growing prevalence of the MP3 in the 2000s virtually ended the cassette’s reign.

Sony recently announced that it is ceasing production of its cassette Walkman. Although the device is about to disappear behind the shadow of history, cassette-tape players still hold sway at roadside rest stops in Korea, where they play popular songs of yore.

In the same way that flowers bloom and fade, modern technology is constantly changing. For the cassette-tape generation, however, the end of the cassette Walkman signals the end of an era.