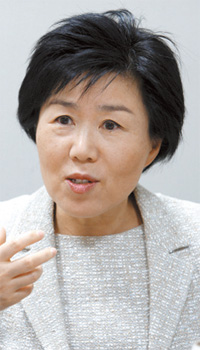 What is lost in translation can be recovered through the art of communication. This is the belief that Choi Jung-wha, president of Corea Image Communication Institute (CICI), abides by. The professor at Hankuk University of Foreign Studies’ Graduate School of Interpretation and Translation spends her time helping people from different cultural backgrounds communicate and see eye to eye.

Over the years, Choi has set several milestones. She became Korea’s first-ever interpreter at an international conference; Asia’s first interpreter to obtain a doctorate in interpretation and translation; and the first Korean woman to receive the Legion of Honour from France.

After founding CICI in 2003, Choi compiled a list of instances of Konglish from across the country, making headlines. One example found was a dictionary puzzlingly named “Powerdic.”

She brought attention to an issue long overlooked, and it was a public-relations coup for CICI.

Eight years later, Korea’s Konglish is anything but a thing of the past.

The Korea JoongAng Daily sat down for an interview with Choi to hear her thoughts on the issue.

Q. It was in 2003 when CICI brought to light some strange Konglish. Did it have an impact?

A. It certainly did provoke strong reactions. It was reported in many major news outlets. We got so many calls at that time that we couldn’t work. It was quite surprising.

For instance, one sign we brought to light was that of a Korean water purifier company dubbed “Human Water.” The name is not only strange, but it can make people from English-speaking countries think of urine.

Has there been an improvement since then?

Yes, I [think so], particularly in conspicuous signs. But I’d like to see more improvement, especially at historic sites like palaces. When I take foreigners to historic sites as part of our regular programs, we’d read the signs and sometimes they’re embarrassing.

Small grammatical errors are O.K., but sometimes people just cannot understand them. It could be because they’ve been translated literally, or because the translation hasn’t taken into consideration different cultural backgrounds. That’s the first impression they get of Korea, so it’s important.

I also hope to see more improvement in [the spelling of] food. Eating is an integral part of tourism.

English signs are tools for people to learn about Korea. If they are done well, people wouldn’t have such a difficult time understanding Korea.

There are several national slogans in awkward English, or what people would call Konglish. What’s your take on that?

It would be nice to have one effective slogan that can used for a long time. But I don’t think it’s bad to have several. Also, when it comes to slogans, some end up taking on a life of their own.

For instance, CICI also came up with a slogan, “Korea’s IT.” “IT” stands for innovation and tradition, as foreigners often say the old and the new coexist in Korea. It also stands for integration and transformation, as the country is divided and is constantly changing. We don’t have much of a budget for the slogan, so we haven’t promoted it much. Still, it has ... become quite well-known.

Also, are slogans the reason people visit Korea? Slogans are just stepping stones to the true nature and charm of Korea. It’s not like they are in the front lines, attracting tourists.

In that sense, is strange English a minor issue?

Well, if you look at the big picture, yes, it is a minor issue. After all, it’s not like people choose to visit Korea because of good English signs.

But when they do visit Korea, we should help them get a good impression, so when they go back they tell positive stories. It would be a problem if those who came here do not see the true nature of Korea. It’s not like there’s nothing to see here. The key is effective presentation of what’s here.

We know those English signs make us look funny. But what more harm can they do?

People would just remain ignorant about Korea. They could even form wrong opinions about Korea. What’s worse, they can turn their backs on Korea as they get disappointed by one mistake after another. It’s always the little things that matter since they can accumulate and have a big impact.

We have to continue to do two things simultaneously: improve our country and effectively deliver the improved nature and charm of our country. And strange English signs are a major roadblock in that process. That is why they have to be corrected.

The Korean government is considering changing the romanization system it adopted in 2000. What’s your opinion on that?

One of Korea’s biggest problems is that we change things too often. What’s important is valuing what people have used for a long time and are thus accustomed to. Of course, it would be wrong to stick to a certain rule just because it has been used for a long time if it has serious flaws. But I don’t think the current romanization system has yet caused major side effects.

You always have to think what the most effective, practical way would be. I think it’s best to have a system that helps foreigners pronounce things as Koreans do as closely as possible, and also a system that’s easy and simple. With things like this, even if the government enforces a certain system, it will eventually retrogress and disappear if people don’t use it. This is not a top-down issue; it has to be bottom-up. That’s one thing I’ve learned in my life. Like slogans, some things just develop a life of their own.

Busan is the classic example of confusion caused by the changing of the system. It’s still known as Pusan in some cases such as the Pusan International Film Festival. What do you do with PIFF? Should it be changed to BIFF?

CICI in fact presented PIFF the Korea Image Stepping Stone Award earlier this year. We give the award to those that promote Korea’s image abroad. I actually asked the organizers if we could spell it Busan instead of Pusan for the sake of consistency. They refused, saying they are already recognized as PIFF in the international community. I actually agreed, as it’s become something like a brand overseas, one of the few Korean festivals that is enjoying success internationally.

So in a way, it was a hurtful experience giving PIFF the award, because it reflected our problem. There is not an easy, immediate answer to this. But we should at least organize platforms for debates and discussions and plan with a long-term vision.

What do you think of the gochujang issue [hot pepper paste]? An airline sold gochujang as “Korea Style Hot Pepper Paste,” raising concerns it lost a chance to brand it.

But it would be wrong not to clarify the brand and just have a lengthy explanation. Those working in communications are responsible for letting people learn about things they didn’t know before, not just for making them understand. Also, I think nations such as Korea that are less known should use proper names all the more.

Lastly, what do you suggest be done to correct strange English?

There are many foreigners in Korea nowadays who have a great degree of interest in and affection for Korea, with high intellectual and cultural standards and good educational backgrounds. We should hire them, offering good benefits, so they can take a comprehensive look at the signs and edit them to be understood easily and correctly by people from English-speaking countries.

The next step would be going a step further than just delivering the message word by word, but making it well-written and well-told so that it leaves a lasting impression.