Korea orders up an extra serving of English

Korea orders up an extra serving of English 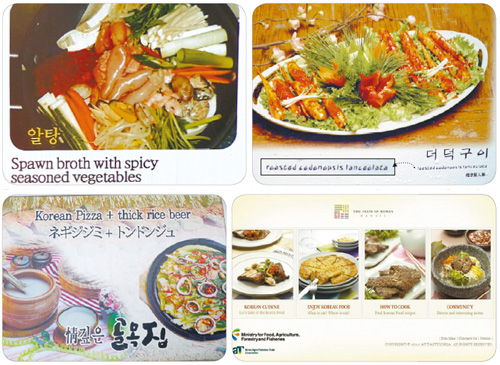 The three pictures above were taken at Korean restaurants in Insa-dong, a major tourist district in central Seoul. Customers may be curious enough to order altang (fish roe stew) but they may not be so excited about “spawn broth with spicy seasoned vegetables,” far left. The photo second from left describes grilled deodeok (a mountain herb root eaten only in Korea) as “roasted codonopsis lancoolata,” with its Latin botanical name. In the photo second from right, another restaurant says it sells “Korean pizza” and “thick rice beer.” But the dishes should be written as pajeon (green onion pizza) and makgeolli (rice wine). At right is a screen shot of the Web site (www.hansik.org) that is run by the Hansik Foundation, which is under the Food Ministry. The site’s home page contained the expression “Let’s taste of the Korea Food,” which the foundation removed a day after a phone call between the ministry and the Korea JoongAng Daily. By Seo Ji-eun


In Korea’s bid to promote its culture around the world, there is one battle yet to be won - the struggle against Konglish. In the second day of our two-day series, the Korea JoongAng Daily takes a look at the misleading expressions, grammatical errors and inconsistent romanization at venues around Seoul and speaks with the people who are trying to standardize the way Korean words are written in English. Yesterday, our investigation took us to Incheon International Airport and Changdeok Palace. Today, we visit restaurants in tourist hot spot Insa-dong and sit down with a renowned interpreter who has compiled a list of Konglish from around the country.


Kimchi has become so well-known around the globe that even a Korea novice could properly name and describe the side dish made of fermented cabbage.

But it gets tricky with bulgogi, another favorite among foreigners. The Ministry for Food, Agriculture, Forestry and Fisheries defines bulgogi in its “Korean Menu Guide” as “thin slices of beef marinated in soy sauce, usually grilled at the table.”

The book, which was distributed last year and lists 124 Korean foods in Korean, English, Japanese and Chinese, recommends that restaurants use “bulgogi” along with a brief description. But it seems there are many restaurants that haven’t taken the ministry’s advice.

Some alternative descriptions for bulgogi spotted at restaurants in Insa-dong, a neighborhood in central Seoul known for its traditional food, culture and crafts, are “Korean barbecue,” “grilled marinated beef” and “thinly sliced beef.” In many cases, the menu doesn’t even list the name of the dish.
A half-day tour around Insa-dong earlier this month with Richard Scott-Ashe, a Canadian radio broadcaster and former editor at the Korea JoongAng Daily, revealed such inconsistencies, in addition to a range of misleading, and grammatically incorrect, expressions and misspellings for Korean cuisine.
“Bulgogi is easy to pronounce and is [spelled] as close to its original pronunciation as possible,” said Scott-Ashe, who is proficient in Korean. “Since more foreigners know bulgogi because Koreans serve the dish so often, I think it is right to call it bulgogi instead of alternatives such as Korean barbecue.”
Even though major public facilities and publications have adopted Korea’s decade-old and official Revised Romanization system for their spellings, many restaurants in Insa-dong use a variety of spellings and descriptions.
Makgeolli was called “rice liquor” at one restaurant, while another described it as a “thick rice beer.” A third used “traditional wine.”
The drink’s spelling also differs depending on where you go: makk?lli, makoli and makguli are just a few.
In May, the Food Ministry was criticized for trying to rename makgeolli “drunken rice,” after holding a public contest for a new moniker.

“To globalize makgeolli, correct romanization is important, but the spelling is hard to read and pronounce,” the ministry said in a public notice at the time.

Following criticism that the proposed nickname may be misleading for people without knowledge of makgeolli, the ministry dropped its plan to adopt the new name.

“It’s not really hard for non-Korean speakers to say ‘makgeolli’ once they hear it pronounced properly,” Scott-Ashe said. “I wonder why restaurants don’t just write the word.”

Charles La Shure, a Seoul-based Korean-literature translator, agreed that Korean food could be promoted better if original names were used.

“My brothers, who speak no Korean, at least know tteokbokki, ramen, kimchi and other Korean foods,” said La Shure, who has lived in Korea for more than 10 years. “From everything I’ve seen, foreigners actually prefer to call Korean foods by their original names ? it makes them sound knowledgeable, like an insider.”

Scott-Ashe thinks that the way the word is written is not as important as whether its spelling facilitates pronunciation.

“Whatever the romanization may be, it isn’t necessarily important. Korea should just come up with a clear and standardized way to sound out the dish names easily,” Scott-Ashe said. “For example, the double t’s in the beginning of tteok [rice cakes] are very hard to figure out. The Korean word actually sounds like ‘duck’ to Westerners. That’s the best you can get.”

Some English-language descriptions of Korean dishes have a more comical effect.

One restaurant’s menu described altang, a spicy stew made with fish roe, as “spawn broth.” A different restaurant next door described deodeok ? the root of a mountain herb similar in appearance to ginseng ? by using its Latin botanical name, “codonopsis lanceolata.”

But restaurants don’t deserve all the blame for the English on their menus.

“Restaurants usually pay design agencies for their menus, and in most cases the agencies are also responsible for foreign-language translations,” said a public-relations manager with Gogung, a restaurant in Insa-dong.

The restaurant, which specializes in bibimbap, or rice mixed with vegetables and beef, is one of a dozen recommended to foreign tourists on the Korea Tourism Organization’s Web site.

“If you want particular attention given to the quality of foreign-language translations, you need to pay extra, which is what we did.

Confusion starts with spelling. Under the government’s official romanization rules, the dish is spelled “tteokbokki,” but the government changed the spelling to “topokki” this year to facilitate its pronunciation.

Descriptions of the dish also differ. Tteokbokki is described as “spicy rice cakes” by the Korea Tourism Organization, an organization under the Ministry of Culture, Sports and Tourism, but the Korea Foundation, which is affiliated with the Ministry of Foreign Affairs and Trade, calls it “stir-fried rice pasta with vegetables.”

Park Sun-youn, head of the Food Industry Promotion Division at the Food Ministry, admitted there was still work to be done to standardize Korean food names in other languages.

“We are aware that we should step up efforts to make uniform Korean food names and their descriptions in English and other languages,” he said. “Regarding the inconsistencies with the Korea Tourism Organization, we will try to have them make corrections immediately.”

For the past two years, the Korean government has been spearheading an ambitious drive to globalize Korean food. Its long-term goal to make Korean cuisine a global favorite prompted the Food Ministry to launch the Korean Food Globalization Forum in March 2008, providing it with a budget of several billion won.

But the forum was disbanded in May 2009 after only three sessions, and the state-run Korea Agro-Fisheries Trade Corporation’s Hansik Foundation, which is also under the Food Ministry, took over the project in March this year. The foundation launched a Web site called “The Taste of Korea” (www.hansik.org) and has promoted the site on social networking sites such as Facebook.

But more problems cropped up for the state-run foundation. The Web site’s home page contained grammatically incorrect expressions such as “Let’s taste of the Korea Food.”

The sentence was removed a day after the Korea JoongAng Daily interviewed Park.