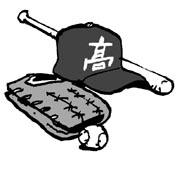 Baseball used to be known by different names in Asia. In China, it was called batball and in Japan, it was known as fieldball. When the game was introduced to Korea by the YMCA in 1905, it was called hitball or strikeball. Koreans thought the object of the game was for players to score points by hitting the baseball. During the Japanese occupation of the Korean peninsula, the name of the sport was switched to fieldball.

Once it caught on, fieldball became an outlet for anti-Japanese sentiment, perhaps because of the thrill of hitting a ball to make it fly away.

After the country was liberated from Japan, the sport started spreading so that competitions were held among middle and high school teams. Although competition was interrupted during the Korean War, the crack of the bat hitting the ball lifted the spirits of a people tired of living through such hard times.

High school baseball reached a turning point in 1967. On April 25 that year, President Park Chung Hee tossed out the first pitch at the opening match of the first President’s Cup High School Championship.

Next year, there will be no more weekday games, and the competition format will be a league, instead of a tournament. It is a good change and ensures a student’s right to study.

Another change, related to university admissions for student baseball players, is more problematic. Starting next year, it will be a player’s batting average or ERA that determine whether a high school athlete can play ball in college, rather than having admission be based on a team’s performance, as in the past. The troubling result could be that athletes start jockeying for position, instead of playing together as a team.

There is one more thing to point out. When the new rules go into effect, the number of championships will decrease from the current four.

They say that you can’t hit a home run every time, but I hope the KBO can devise a better system for our high school baseball players. We owe that much to these young athletes and to the history of the sport.