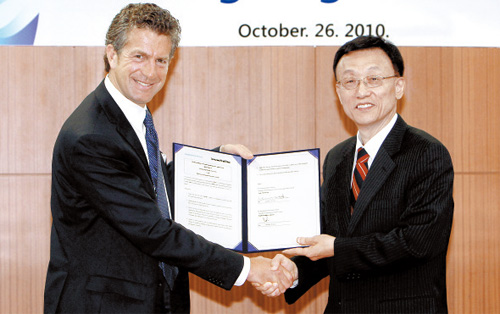 Nam Sun-hyun, president for broadcasting at JMnet, and Stephen Dunbar-Johnson, publisher of the IHT, signed the accord at the JoongAng Ilbo building in Seoul yesterday. Details will be worked out by the two companies if JMnet is selected as a general programming TV channel operator at the end of this year.

“I am very satisfied with the partnership that we have had with JMnet for the past 10 years,” Dunbar-Johnson said at the signing ceremony, adding that the two companies should strengthen cooperation and exchange. “Survival for the media today in a world of fierce competition depends on good content. [JMnet] has that good content.”

The International Herald Tribune is the global edition of The New York Times and has partnerships with newspapers in eight countries, including Japan’s Asahi Shimbun, Spain’s El Pais and Russia’s The Moscow Times.