Lee Oi-soo as popular as he is notorious

Lee Oi-soo as popular as he is notorious 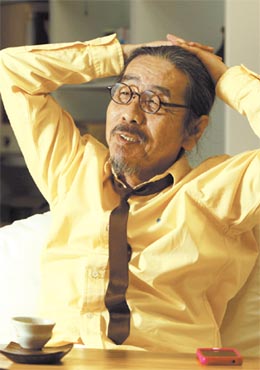 HWACHEON, Gangwon - Some adore novelist Lee Oi-soo’s writing and some loathe his straightforwardness.

“I think artists and novelists are watchers of the times,” he said during an exclusive interview with the Korea JoongAng Daily to celebrate its 10th birthday. “If I think something is wrong, I try to reveal my perspective on it.”

Love him or hate him, the 68-year-old’s ascent from absolute poverty, battle with alcoholism and struggle with online lynch mobs have laid the foundations for one of Korea’s most prolific writers. His life has been intense, but his words can soothe.

It is a person who has already experienced the worst of life, after all, who can effectively communicate the best of it.

Raised by his grandmother, Lee had to beg for food when he was young. In some periods, he had to sleep in doghouses and dumpsters. A daily routine most people take for granted, such as taking a shower, was unthinkable. At one point, Lee didn’t shower for three years.

He was small and skinny, weighing only 38 kilograms (83 pounds) when he was 39 years old. Overcome with a sense of inferiority, the college dropout kept reading. It was his only form of satisfaction.

Lee worked for more than a decade in menial jobs.

Financial difficulties and chronic alcoholism caused his wife to suffer from depression. He isolated himself as a form of punishment for years on end.

Where Lee is today is a long ways from where he had once been.

With over 30 books to his name, Lee has considerable clout in the literary world and throughout the realm of pop culture. And a major reason for his popularity probably has something to do with his decade-long effort to communicate with his readers online.

Lee has the highest number of Twitter followers among Korean celebrities with 427,799, far higher than figure skating gold-medalist Kim Yu-na.

“Many people believe there is distance between writers and them, but I just don’t like it,” Lee said. On the day of the interview, four elementary school girls visited Lee with gifts of drawings, handmade mugs and a cactus.

Lee’s popularity has led to television commercials and a sitcom. Variety and talk shows have sought him out to take advantage of his broad appeal.

The author is so popular that Hwacheon, Gangwon, built him his own village where he could live in 2004. Named Gamsung Village - gamsung in Korean means sensibility and is Lee’s favorite word - it is the first time a village has been built for a living novelist. Hwacheon allocated 14,000 square meters (3.5 acres) of land for the village, which is still under construction. Between 2,000 and 3,000 people have visited every year.

In a nation where the number of consumers buying books is decreasing, Lee consistently tops the best-seller list, and, for better or for worse, his every word often becomes the talk of the town.

The Korea JoongAng Daily sat down with Lee in Gamsung Village and asked him for his views on a diverse range of issues, from his superstar popularity to rampant cyberlynching in Korea. 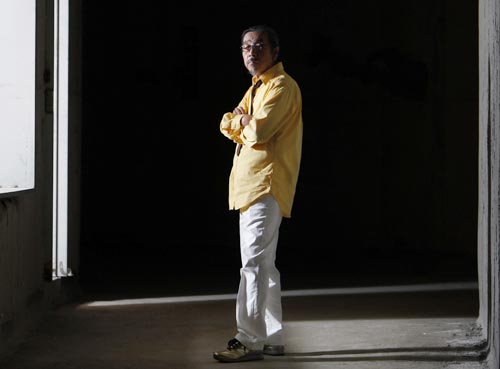 Love him or hate him, novelist Lee Oi-soo, 64, has huge clout in the literary world and throughout the realm of pop culture. By Oh Sang-min


Q. Recently, you were chosen by 43,360 netizens as the most representative Korean writer. What does it feel like to be loved by many people as a novelist?

A. The biggest pleasure for writers is being loved by readers, I think. I feel flattered. I don’t really care about awards given out by organizations or committees, because I believe artists are the ones who have the most authority. Because art is the most beautiful thing a human being can do. But I care about feedback from readers. I really do.

You are often attacked in cyberspace as you speak up on certain issues, whether it is something related to politics or something else. (Lee recently stood up for Korean rapper Tablo, who had been accused of faking his educational credentials. The rumors were proven to be false. Because of the controversy, Lee became public enemy No. 1 among Tablo’s detractors.)

I think artists and writers are watchers of the times ... If I think the government’s policy is wrong, I try to reveal my perspective on it.

It doesn’t really matter whether Tablo faked his educational background or not. People seemed to vent their anger on him, by cursing his month-old baby and wife. For some who have a sense of inferiority, Tablo was hard to accept because he was a good student. Because people didn’t believe him, I think Tablo also frequently mentioned his Stanford background.

But the netizens went too far. They are the ones who never raise questions about themselves. They are sick. They need some kind of therapy.


You’ve been communicating with your readers in cyberspace since the dial-up Internet made its appearance. It means that you’ve been dealing with all types of malicious netizens. After all these years, have you learned how to cope with them? In fact, it is a serious social matter as many celebrities have committed suicide because of malicious comments.

I used to try to persuade them to stop posting such comments or tried to give them advice from the bottom of my heart. I could confront them by humiliating them with my writing because I’m better than them when it comes to writing - but I don’t.

From my experience, persuasion does not always work. The worst case scenario is a lawsuit, which I resorted to a couple of times. But the best way to deal with it is to just delete the malicious comments as they as come in with the help of family. It’s one way to make them powerless. (Laughs)

I think they are part of society’s externalities, a result of a society that puts too much emphasis on school grades rather than cultivating personality.

Have you ever felt sick and tired of the ugly side of the Internet and stopped using it? For some, you’re their favorite prey.

Never. I think I have to fight until it is improved. I think there should be at least one senior [who is a role model to the young generation].


Have you ever considered serializing your novels on the Internet like other novelists? (Lee has three computers including a Mac in his writing room, and he also uses an iPhone 4 with hot pink silicone cover.)

I’m not the type of person who can serialize my novels. In addition, the Internet and other social-networking media are where I can practice my writing skills. In fact, my writing has improved a lot because I’ve been training on Twitter. For example, earlier this year I finished a short novel in a week, which never happened to me before.

I don’t think the Internet is the most appropriate outlet to publish my novels. I use the Internet to gather information before writing. It also helps me to keep up to date on mainstream opinions. By talking to many ordinary people, I can get a good grip on their frustrations and hopes.


Is there any computer program you’re learning now? (Lee admits that pornography on the Web led him to learn how to use the Internet in the first place. He is now proficient in many programs, especially related to drawing and composing.)

I use a MIDI called Reason. With that MIDI, I’ve composed about 100 songs so far, but none have been released. Since an exhibition hall is under construction down there [within Gamsung Village], my writings, drawings and music will be displayed.

I want to surprise people with my music. (Laughs)


What are your thoughts on e-books? Do you think they will help the stagnant publishing industry in the long run?

Personally, I prefer paper books rather than e-books, because the former gives you the pleasure of flipping pages. But I also try to experiment with e-books. I provide free applications for those who use smartphones so they can download whole pages of my two prose books “Ahbulryu Sibulryu” and “Ha-ak Ha-ak.” [Ahbulryu Sibulryu is a Chinese phrase meaning “If I don’t flow, time doesn’t flow” and Ha-ak refers to the sound of gasping.]

These two applications are in the top 10 most downloaded applications. But the thing is, is the copyright protected? Can writers be fairly paid from downloads? We should come up with a plan to protect copyrights and then think about the transition from paper to e-book.

I think Koreans are very good-natured. When they come across good downloads and pornography, they share them with their friends.


In your latest book, “Ahbulryu Sibulryu,” you lamented that people are getting more violent. Can you offer them a way to improve their sensibilities?

Expose yourself to Mother Nature as much as possible and go to many galleries and exhibitions to have a look at beautiful things. Having a religion and following the lessons of your religious leader is a good way, too.


You once said you don’t have a masterpiece of your own that truly represents you. Are you planning to write a representative novel?

Every writer hopes his or her next piece could become a masterpiece. (Laughs) I’m working on a new novel.

I already made the title, but it could be changed later, though. The title is “Unidentified Walking Creature.” I think people really don’t know what happiness is.

So I want to write a novel with a leading character who is really happy, unlike my previous characters who lived in despair. With this story, I want to remind my readers of real happiness. I’m gathering information about this now.


It’s an abstract question, but what can be done to become happier?

What makes us happy is not material things. We have to be rich in spirit first. Throughout human history, material items have never brought happiness.


Of many nicknames you have, such as “guardian spirit,” “the 600-million-year-old man,” and “Twitter president,” which do you like best?