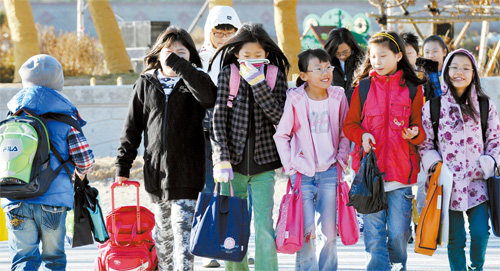 Elementary school students in winter coats hurry to school in Daejeon yesterday. A cold weather advisory was issued in most regions. By Kim Seong-tae


The harvest moon is in the sky, but temperatures on Earth feel like nothing less than the dead of winter.

The good news, according to the Korea Meteorological Administration, is that the cold snap should ease up on Friday.

A high-pressure system from Siberia is blamed for the frigid weather.

The first frost and ice were officially observed in Seoul, the central mountain regions and some inland areas. “It was the first time in seven years that ice has been spotted in October in Seoul since [Oct. 29,] 2003,” said the KMA spokesperson.

In addition, Ulleung Island had its first snow this year, seven days early than last year, and 18 days earlier than in an average year.