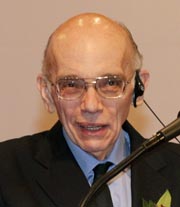 Jose Antonio Abreu, a Venezuelan economist and musician who has been chosen as the 2010 laureate of the Seoul Peace Prize, said yesterday that he believes music can influence young people and contribute to world peace.

Abreu started the “El Sistema” movement, or Social Action for Music, to improve juvenile education and welfare, supporting youth orchestras to encourage children from poor backgrounds to integrate into society by performing in orchestras.

“Since infancy, I had the opportunity of embracing musical vocation, which is why I ardently desired to share it with the largest possible number of Venezuelan youths and children in conditions of marginality and social exclusion,” Abreu said as he received the prize at a ceremony in Seoul.

Abreu was chosen as the 10th recipient of the award established to commemorate the 1988 Seoul Summer Olympics.

“This requires me to concentrate all of my existence to the service of social justice and strive against violence through the seeding of music on a massive social scale.”

Abreu established the music educational program in 1975 to educate and rehabilitate kids who wander the streets of the South American country, where drugs, gunfire and violence are rampant.

More than 300,000 children have benefited from the program since Abreu started the El Sistema movement, which has achieved global fame.

The Venezuelan said his program has given street kids, school students and even juvenile inmates the chance to play music in a community with an orchestra to learn of social justice and dream about brighter futures and a peaceful world.

Abreu noted that these children will play a role in building “universal peace” with music.

“To achieve this [universal peace], nothing is more relevant and efficient than infusing those standards within the soul of each child, since their most tender infancy, with the mystery of sound as a source of joy and hope,” he said.

“To construct inner peace within the heart of men, music provides perennial fundaments to the sublime of a new world, in which a renovated musical art shines as a worthy beacon of portentous human development and an ethical conscience,” he added.