Itzhak Perlman, back in Seoul, brings down the house

Itzhak Perlman, back in Seoul, brings down the house 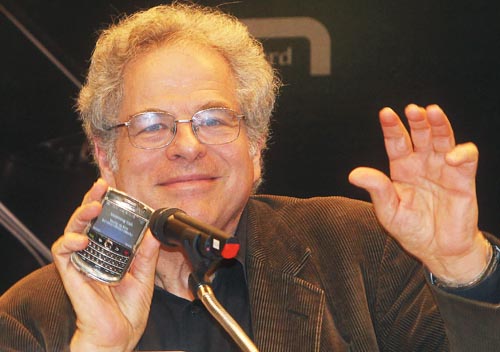 Violinist Itzhak Perlman delightfully shows his Blackberry to the press as he received an unexpected phone call from a friend in Korea during a press conference at Hyundai Card headquarters in Yeouido, western Seoul, Monday. [Yonhap]


Violinist Itzahk Perlman must have enjoyed the food in Korea. So much so that the American musician joked with the media on Monday before his first recital in Korea in 19 years on Tuesday.

“If the food is good then the encores will be good,” Perlman said.

In addition to the four pieces that were announced in advance of his performance at Seoul Arts Center, he and his long-time piano partner Rohan De Silva delivered six smaller pieces, along with two encores - encompassing the classical, romantic and contemporary periods. The recital brought the Korean audience to its feet.

“I feel very, very close to Korea, because when I teach at Julliard a lot of my students come from Korea and they’ve always told me I should really visit Korea,” said Perlman.

He made his way directly to the press conference after landing at Incheon International Airport on Monday.

Perlman’s virtuoso performance on Tuesday reflected what he had told the reporters at the press conference: “As you get older, hopefully the playing is no longer a problem. The playing is just something that you don’t think about .?.?. When you are on a certain level as a player you should forget about playing [and focus on] what you are doing musically. I think it gets easier as you become more experienced.”

At the concert, the 65-year-old classical music superstar looked comfortable and confident. His opulent, fluid and warm vibrato filled Seoul Arts Center’s Concert Hall and his incredibly precise technique demonstrated just what has made him a household name for more than five decades.

The Mozart Sonata for Violin and Piano in F major, K. 376 started out with a lively rhythm. De Silva, the Sri Lankan pianist, delivered sophisticated, expressive and heart-moving sounds that were more than mere accompaniment.

“I am almost accompanying the piano,” Perlman said of De Silva’s abilities.

With his rendition of the Beethoven Sonata for Violin and Piano No. 9 in A, Op. 47, more commonly known as the “Kreutzer Sonata,” Perlman delivered an impassionate and animated performance.

“[It contained] all the typical Beethoven characteristics of rhythm and drama, which I find is probably the most satisfying thing as a violinist,” he said.

Romantic pieces by Brahms and Schumann - Scherzo in C minor from the “F.A.E.” Sonata and Fantasy Pieces for Violin and Piano, Op. 73 - followed suit.

In addition, six smaller pieces were played that were not part of the program.

Before each piece, he had a brief discussion with De Silva which sent a ripple of excitement and anticipation through the hall.

They played, among others, Kreisler’s “Tempo di Minuetto,” John Williams’ “Schindler’s List” theme and Wieniawski’s “Caprice in A minor.”

The audience seemed to hold its breath while he performed the last encore piece - Bazzini’s “La Ronde des Lutins,” which was interspersed with his masterly bowing and pizzicato. When the piece came to an end, the hall burst into thunderous applause.

With the sound still reverberating from the rafters, Perlman glided back stage, with De Silva following a few steps behind.