Pretty-boy actor takes his turn as a villain

Pretty-boy actor takes his turn as a villain 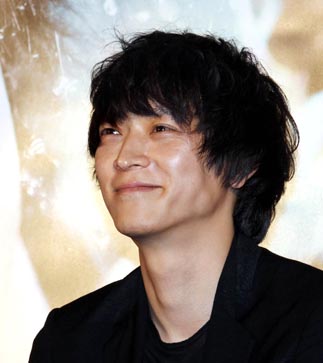 Actor Gang Dong-won may have what it takes to be a pretty boy, but with his new film, “Hunters,” set for release early next month, Gang seems determined to widen the scope of his acting with his first role as a bad guy.

Gang received Best Actor honors at the Critics Choice Awards on Oct. 20 for his role as a North Korean spy in this year’s hit “Secret Reunion.” Sponsored by the Korean Film Critics Society, the awards ceremony is one of the major events of its kind in Korea.

Although he has received awards from other associations, including best new actor and most popular actor, this was his first best actor award. And in a survey of local film distributors last week, Gang was chosen as the actor with the most potential to succeed over the next 10 years.

Gang’s previous two hits, Secret Reunion (2010) and “Jeon Woo-chi: The Taoist Wizard” (2009), put him in the “10 million club” because together they attracted an audience of more than 10 million.

Hunters, directed by Kim Min-seok - cowriter of “The Good, The Bad, The Weird” (2008) - depicts the struggle between a psychic (Gang) who can control people with his mind and another (Ko Soo) who is immune to the psychic’s supernatural power.

But Gang isn’t too focused on the fact that he played a villain for this movie, saying instead that acting is about playing different roles.

“I don’t think there are certain roles that suit me,” Gang said at a press conference last week. “I believe that as an actor, I have to change myself to match whatever role I am given - whether it is someone who is disabled or a villain.”

When this 29-year-old actor - who used to be a model - jumped into the film industry with his first role in the 2003 film “Don’t Believe Her,” all he needed to be convincing was his smoldering good looks.

After a few more films, he quickly gained an audience among young female fans, but he was largely dismissed as a pretty face likely to be forgotten in a couple of years.

Critics called him the male Jun Ji-hyun, comparing him to the actress from “My Sassy Girl.” Like Gang, Jun started off as a model and won praise for her role in that film, but her one-dimensional acting failed to impress moviegoers and she quickly lost popularity.

But Gang has challenged himself with a variety of roles - prisoner, legendary fighter and North Korean spy - and the strategy has worked to his advantage.

With Jeon Woo-chi, Gang played a wizard battling the forces of evil, and this brought about a major change in his acting career, with stories about the “reinvention of Gang Dong-won” filling the pages of entertainment magazines and newspapers last year.

Every actor wants his or her next movie to be a hit, but Hunters has special meaning for Gang because it is his last film before he starts his mandatory military service.

“I think of [serving in the army] as shooting a long feature film,” he said.

He will be out of the public eye for about 21 months while he is in the service, but his passion for his job is not likely to diminish.

“I’ve never regretted becoming an actor,” he said. “I know I have to pay for my celebrity but I love my job more than the difficulties that come with it. I’ll just keep working hard as an actor.”