Santana scores again, with his style

Santana scores again, with his style 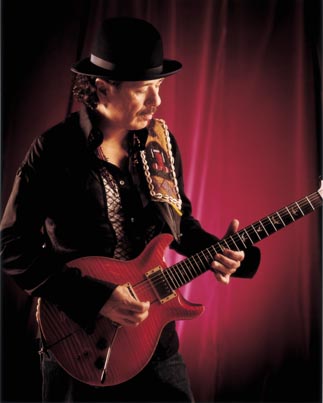 Carlos Santana has a new album of classic songs, played his way. Provided by Sony Music

He goes by many names - guitar legend, god of Woodstock and pioneer of rock, salsa and fusion jazz. But whichever way you refer to him, there is no doubt that the Latin rock guitarist Carlos Santana just keeps getting better. His recently released album, “Guitar Heaven: The Greatest Guitar Classics of All Time,” featuring remakes of some of the most highly praised rock songs of all time, sums up the reasons why he is a 10-time Grammy Award winner and revered among guitar aficionados worldwide.

“The concept [for the album] was simply to be out of the Top 40 rat race, if you will, at a special time in music history, which is dominated right now by electronic programming and pure electronics, and say the original rock instrument was the guitar,” Santana said in an exclusive interview with the Korea JoongAng Daily.

He said the people he worked with on the album wanted to do a tribute to the guitar, and felt that he would best represent it.

“The main goal was to honor the concept of trust,” he said. “That’s the essence of a project like this.”

That trust was indeed kept. Even though the album does not completely diverge from the melodies of the originals, Santana is highly praised for his musical talents and his ability to pull together major names in the music industry, from Rob Thomas of Matchbox Twenty to Chris Cornell of Soundgarden.

“It’s a real blessing that I was able to work with such amazing artists - from Yo-Yo Ma to Nas,” he added. “I watched Gavin Rossdale [a member of British rock band Bush] become someone like I had known from Jim Morrison and the Doors. I mean, in front of me, he just became like this shaman. He inspired me to do different things in the way I play the guitar.”

Santana’s successful career, which began in the late 1960s, is backed by his distinct playing style as well as his focus on coaxing original sounds from his guitar. These hallmarks are also evident on his new album, and the artist revealed that his primary goal was to remain true to his classic sound.

“I often get asked, ‘Did you listen to the original songs? Did you get the same pedals, the same amps?’ and I answer ‘No,’” he said. “Each song is like a woman to me. Why would I want to date the same woman wearing the same suit as Eric Clapton? This is not a situation in which someone has to win and someone has to lose. This is about complementing.”

For a seasoned artist, keeping things fresh can be difficult. He says that he has a technique to help him avoid falling into a routine.

“If you remember the very first time you ever French kissed - the first time you felt that everything was pristine, with purity and innocence - if you stay with that feeling morning, noon and night, you’re going to be fresh with energy,” he said. “My mantra is first and everything. I work with a lot of young people, musicians who are old enough to be my children. I share their enthusiasm, eagerness to explore and eagerness to expand. Never lose that!”