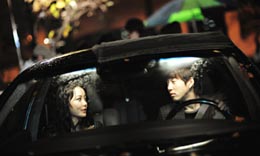 If you think autumn is the best season to enjoy romance films, try “Come, Closer,” an episodic film about five different couples. From one couple just starting their relationship to two people who break up but can’t get over each other, director Kim Jong-kwan sheds light on the diverse aspects of love.

Kim debuted with his six-minute short “How to Operate a Polaroid Camera” in 2004 and went on to become known as the Korean lwai Shunji, after the Japanese director who became famous in Korea for films such as “Love Letter” (1999) and “Hana and Alice” (2004). Kim is well known for his sophisticated depictions of women in love.

Come, Closer is notable for casting many emerging actors and actresses. Among them are singer-turned-actor Yoon Kye-sang and Jung Yu-mi, who recently starred in “My Dear Desperado” (2010) and impressed the audience with her meaty acting. The two pair up in this film as the break up couple. Jung got her start in film in Kim’s first short “How to Operate a Polaroid Camera” in 2004.

Also starring in the film is Yozoh, who made a name for herself as an indie musician and is making her debut in this film.

“Acoustic” is another film with three separate episodes all based on the same theme of music. One episode entitled “Dangerous Confession of Broccoli” is a story of a girl who comes down with a rare disease but has a dream of becoming a singer.

Although the film is a low-budget independent film, cast is flamboyant. Up-and-coming actress Sin Se-gyeong features in the first episode and she also sing a song in that episode. In a second episode entitled “Bakery Raid” where two starving young indie musicians break into a bakery, Lee Jong-hyun and Kang Min-hyeok, two members of idol band CNBLUE, appeared. Third episode “Unlocked” is a love story between a girl who has a special memory with a certain song and a guy who calls himself as an expert who is good at analyzing sounds. Lim Seul-ong, a member of idol boy band 2 am, played the role of sound analyzing expert.


Battle for Terra (All)

“Battle for Terra” was originally released in the United States in 2007 and while it received mixed reviews, it did gain praise for its computer animation sequences.

The story is similar to “Avatar” in that humans have destroyed Earth and must now find another suitable place to live. They find Terra, a planet with a peaceful species of sentient aliens, and hatch a plan to attack and take over the world. The film centers on the interaction between two aliens and a human as they struggle to understand each other while trying to save Terra from an all-out battle between two powerful species.

The film is heavy on space and aerial battles and light on real plot development, but it’s pure animated action. And that could be enough to bring a smile to your face.

Released in the United States in 2008, “Last Chance Harvey” is a romantic drama written and directed by Joel Hopkins that features Dustin Hoffman as a divorced music composer and Emma Thompson as a single woman who collects statistics at the airport.

Hoffman’s character, Harvey, is in London for his daughter’s wedding, but feels shut out by his daughter and family. After the wedding, Harvey misses his flight back home and is fired by his boss. When he goes to the airport bar, he meets Kate (Thompson) and begins to forge a new relationship that could help him learn what it takes to regain the trust and love of her daughter.


Legend of the Guardians: The Owls of Ga’Hoole (All)

Have you been hankering for an epic, action-packed animated film in which good owls and evil owls fight over owldom? Well, now is your chance, thanks to director Zack Snyder, who previously directed “300” and has once again been able to demonstrate his penchant for bringing together stunning visuals and woefully mediocre scripts.

“Legend of the Guardians: The Owls of Ga’Hoole,” based on a book series by Kathryn Lasky, features fantastic voice talents, as well as an entertaining story for the kids. But this derivative film could have the adults sedated.