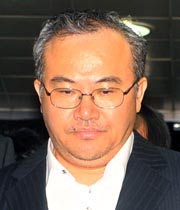 C& Group chairman Lim Byung-seok, through his attorney, refuted allegations raised by local media reports that he offered bribes to officials for business favors, that his annual salary is 8 billion won ($7.2 million) and that he lives in a luxury house and drives an imported luxury sedan.

Lim was arrested on Oct. 21 by the Supreme Public Prosecutors’ Office on charges of embezzling a large amount of the company’s money and raising slush funds to buy favors from politicians and government and financial officials.

“Lim said there’s nothing much he can do when he hears he’s a failed businessman, but he said he can’t accept that he’s a shameless businessman,” said Ahn Sik, an attorney who represents Lim.

“Lim said his rental house expires this month and he [will have] a hard time moving to another place because he’s short on cash,” Ahn said.

In regards to an allegation that he drives an imported luxury sedan, Lim’s attorney said C& Group’s affiliate company used a loan to pay for a used luxury sedan, instead of paying with cash.

As for claims by C& Group’s union workers that Lim’s annual salary is 8 billion won, Lim flatly denied the allegations.

“I have never received such a large salary - that’s the total salary I received over the last 20 years,” Lim said through his attorney said.

While Lim was also suspected of offering to use his corporate card to lobby opposition Democratic Party politicians for business favors when his company got in legal trouble, Lim reiterated his frustration.

“Lim said one of his company’s affiliates is in a lawmaker’s district and he knows him well, but he stressed that their relationship doesn’t involve lobbying,” Ahn said.

Lim, 49, was arrested last week over suspicions that he had embezzled about 100 billion won in corporate money for a slush fund to bribe politicians and government officials.

Prosecutors are accusing Lim of fraud and breach of trust in his hostile takeover of companies in trouble after the 1997 Asian financial crisis.