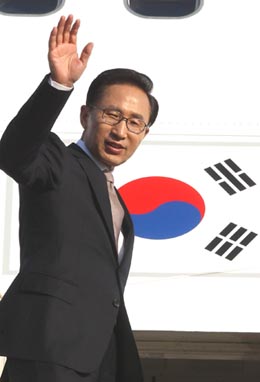 Lee is scheduled to meet with leaders of the Association of Southeast Asian Nations today, according to the Blue House.

Korea’s ties with the association, which represents 10 countries in the region, will be upgraded to a strategic partnership during the summit.

Lee will also attend a separate summit with leaders of Asean, China and Japan today.

The trilateral meeting also comes amid China and Japan’s territorial dispute over islands, called Diaoyu in China and Senkaku in Japan, in the East China Sea.

Lee will have a bilateral meeting with Indian Prime Minister Manmohan Singh today to seek his support for the G-20 Summit in Seoul next month. A planned summit with Indonesian President Susilo Bambang Yudhoyono was canceled because the leader shortened his stay due to the post-tsunami and earthquake rescue in his country.

Lee will also attend the East Asia Summit and have a bilateral meeting with Vietnamese President Nguyen Minh Triet tomorrow. The East Asia Summit is an annual pan-Asian forum at which 16 countries in the region discuss trade, energy and security issues. The EAS is made up of the 10 Asean members, China, Japan, South Korea, India, Australia and New Zealand.

This year, Russia and the United States will attend the summit as prospective EAS members and special guests of the chair.

On the sidelines of the summit, Lee is expected to meet with U.S. Secretary of State Hillary Clinton in a separate meeting to discuss North Korea and Northeast Asia issues.

Lee is scheduled to return to Korea tomorrow.