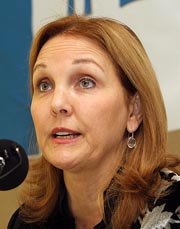 The chief of the UN food agency appealed to the world yesterday to support aid programs in North Korea to feed its most vulnerable children, saying that only a fifth of the agency’s needs are being met.

Josette Sheeran, executive director of the World Food Program, arrived Wednesday from Japan for a two-day visit as part of a four-nation Asian tour that will take her to China and North Korea later this week.

“Our assessed needs in North Korea for the nutrition-focused program that we have now are only 20 percent funded as it is,” Sheeran said during a press conference.

The program “reaches children in hospitals, in orphanages and in institutional settings and targets very specific, highly fortified nutritious food,” she added.

The WFP currently feeds about 671,000 malnourished children in 65 counties across the impoverished nation. In order to reach the 2.5 million children in need, according to agency estimates, the program will cost $45 million annually, and will require 75,000 metric tons of food.

“We’re way below those funding levels,” the director said.

Her two-day trip to North Korea is expected to include meetings with senior government officials and a visit to one of the agency’s project sites, she said.

Earlier yesterday, the director met with Seoul’s top diplomat to seek greater cooperation with South Korea in the WFP’s fight against hunger.

“We have quite a long history with South Korea. We really had the honor of standing with the people of Korea many decades ago when Korea was having its own battle against hunger and poverty,” Sheeran said at the start of a meeting with Foreign Minister Kim Sung-hwan.

She showed Kim a red cup that her agency uses in efforts to help children in Africa, saying that she carries it with her to “remind me how vulnerable people are.”