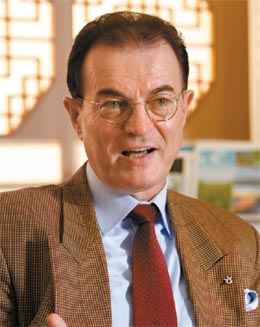 Back in Germany, when Lee Charm still went by his birth name, Bernhard Quandt, trying to find a book about Korea, let alone a Korean-German dictionary, was almost impossible.

“The only Korean dictionary I found was a book with Hangul written out in longhand - a very amateurish kind of thing,” said Lee, the German-born president of the Korea Tourism Organization and the first naturalized Korean citizen to head a state-run body.

More than 30 years after his first visit to Korea in 1978, Lee’s job is being chief cheerleader for visiting Korea, and the country is seeing a surging of tourists. Last year, the number of foreign visitors well exceeded the 7 million mark for the first time, with a total of 7.81 million. This year, the tourism office expects the number to exceed the government target of 8.5 million, thanks to a flood of visitors from China.

Speaking in fluent English and Korean, Lee described his trials and triumphs since he took his job last July in an exclusive interview to celebrate the Korea JoongAng Daily’s 10th anniversary.

“Along with the shrinking in the world economy, the global tourism market shrank by 5 percent,” Lee said. “Korea’s tourism sector, however, grew by 13.5 percent last year” - even with all the bad publicity about tensions between North and South Korea.

The tall, blue-eyed naturalized Korean, who got his citizenship in 1986, talked passionately about Visit Korea Year 2010-2012, the ambitious campaign to draw more than 10 million tourists, as well as his colorful career in Korea as an actor, university lecturer, author and political figure.


Q. You’ve now lived in Korea for over three decades. What about Korea made you stay so long?

A. Before I first came to Korea in the late 1970s, nobody knew about Korea then. After I came I was shocked because I had expected a very exotic, backward country, and what I found was very different. It was much more open and advanced and, at the same time, I felt this very interesting tension between the modern, dynamic, go-getting society and this ancient culture with its charming beauty. Also, it interested me that Korea had a mixture of very different religious backgrounds - strong Buddhist and Christian communities alongside Confucian morals and Shamanistic traditions as well. I was fascinated and curious to find out more.

You appeared as an actor in some major television dramas and films. Did you have ambitions to become a political figure after being in the public eye?

It wasn’t a really focused kind of thing, but actually in Germany I was active in political parties and a member of youth organizations there. However, when I was acting in Korea, it seemed impossible for someone like me, an outsider, to be in a public office. So I gave it up a long time ago. But in the meantime, Korean society changed a lot and I think in some way I played a small role in that.

In what kind of way?

Well, for example, in the early 1990s, I played a role in a TV drama called “Ttalbujajip [A House of Daughters].” It was my own story. [Lee is married to a Korean woman]. It was the first time that international marriage was shown in a positive light on national TV.

The fact that TV could show an international marriage in a positive light was, in part, because of my own image.

People knew me already. I did a lot of culture shows and was already known as a relatively good speaker of Korean and someone who loves the culture.

You are the first naturalized citizen to become the head of a state-run body. What is your impression of Korea’s civil service life?

Of course, some bureaucrats are stubborn and inflexible, but the majority of the ones I meet are very dedicated, underpaid and overworked - very good people basically. There are some foul eggs and people who take bribes and abuse their positions, but they are definitely the minority.

What are the main hindrances to Korea’s tourism sector?

I think the main thing is that Koreans are still not aware of the value of our culture and the premium quality of it. If you ask a Korean walking around the city about the image of Korea, what there is to see here, he would be like, “Oh, you know, Seoul, visit one day or two days, that’s enough.”

We need to change that. The image of a nation is created by the people. Korea is only starting to rediscover the real value and attractiveness of our own culture, with design, hallyu, food and leisure.

You’ve mentioned that the government budget for the tourism sector is too small.

If you compare with the private sector, the normal marketing budget is three to five percent of turnover for consumer products. The tourism turnover last year was about $9.4 billion - 3 percent of that would be around $313 million. But actually we had around $26.7 million for marketing and advertising.

Of course, I’m realistic. I don’t think the government will increase the budget for marketing by ten-fold over night. So we need to find ways for synergy.

One way is to work with private industry. If we create a positive image of Korean tourism, it will add to the product value of Korea.

The reason why Italian fashion, German cars or French wine can sell at top prices in the world market is not only because of the technical or functional values but because of the emotional value that comes with the cultural image. With Visit Korea Year, I’m trying to get synergies with companies here and get them to contribute to the budget to promote Korean tourism.

Speaking of Visit Korea Year, there has been some negativity in the press about it being quite vague and ineffective in contributing, in a real way, to Korean tourism.

Any kind of campaign or government activity that claims something that is not really there yet is always prone to criticism.

But the Visit Korea Year is a campaign that is directed to the domestic market, to raise awareness and get people to cooperate and come together and help the tourism market grow.

We had two Visit Korea Years - one in 1994 and one in 2002. Both times, I was a member of the committees. The first was very much KTO-directed, and the second time it was more of a government thing, and this time it is a private sector thing.

Visit Korea Year committee members this time are all from private businesses, not the government. The acting chairman is a businessman. The idea is that businesses and the private sector work together to make Korea a more attractive tourism destination.