U-23 national football team manager Hong Myung-bo, center, leads his players through a warm-up session at the National Football Center in Paju, Gyeonggi, on Thursday. [YONHAP]


Known for his stoic demeanor, Hong Myung-bo was an intimidating captain on the national football team during his playing days. But football fans might find themselves doing a double-take when they hear Hong talk about coaching the U-23 national football team as it prepares for the 2010 Guangzhou Asian Games. The 41-year-old manager of the U-23 squad is employing a method that is drastically different from that of many of his predecessors. He frequently talks about respecting his players and the importance of sensitivity.

“The days when managers used authoritative methods to rule teams are gone,” said Hong at the National Football Center in Paju, Gyeonggi. “It’s more effective to make the effort to understand the players and encourage them to achieve a collective goal.”

In his prime, Hong was considered one of the top defenders in Korean football. After retiring from the game in 2004, Hong began his coaching career and served as an assistant under former national team managers Dick Advocaat and Pim Verbeek from 2005 to 2007. He also served as an assistant on the U-23 squad in 2007-08 before agreeing to manage the U-20 squad. Hong led the team to the quarterfinals at the 2009 U-20 Egypt World Cup. He is now focused on helping the U-23 squad win gold at the Asian Games for the first time in 24-years.

Hong, like many other Korean football players from previous generations, was trained from an early age to think that winning was everything, no matter the sacrifice. The managers were tough on the players and the players with seniority were equally as hard on the younger players. 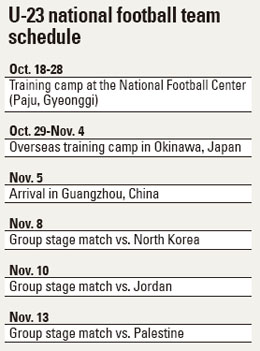 Today, he has a different philosophy about how victory is won.

“You simply cannot build team chemistry by venting your frustrations and anger at players. You just can’t build a good team that way,” said Hong. “Instead, it’s important to convey the importance of every player on the team, regardless of his age or role on the squad. If you warm up to your players and make an effort to respect them, the players respond.”

As an example, Hong spoke about Kim Jung-woo. The 28-year-old defensive midfielder was one of the best players on the 2010 World Cup squad and was selected for the U-23 team as one of the three wildcard players, defined as a player who exceeds the age limit. Despite his strong performance in the past, Kim has struggled noticeably since the World Cup.

“I didn’t ask Jung-woo why he wasn’t performing to his ability,” stated Hong. “When a player is mired in a slump, it’s better to ease the player’s psyche by making small talk.”

Although it would have been considered unthinkable for previous managers, Hong uses the honorific form of speech when addressing players. The honorific form is typically used only with strangers or elders. For Hong, it’s a way to show respect for his players.

“Through my speech I try to show my players that they have my respect,” said Hong. “I can’t demand respect from my players if I don’t treat them that way.”

He is also known for using language that is direct and easy to comprehend. Players who were once intimidated by the legendary player have grown comfortable with their manager and they are now quick to crack jokes with him.

For Hong, another important factor in creating team chemistry is camaraderie during meals. It’s something he picked up from Advocaat during the 2006 World Cup in Germany. Hong believes the louder and more rowdy the players are during meals, the better the team chemistry will be.

“You can get a good sense of the personality and psyche of the players by watching them during meals,” said Hong. “The only problem is that our players are a little too loud at meals.”

Hong and his staff, which includes his former national teammates Seo Jung-won and Kim Tae-young, also try to minimize the pressure on the players. For example, they refrain from speaking about winning the gold medal and the subsequent exemption from mandatory military service awarded to all players who win gold at the Asian Games.

“Talking about such goals can place added pressure on the players and can actually work against us reaching our collective goal,” said Hong.

The U-23 national team departed for their overseas training camp in Okinawa, Japan, yesterday after a 10-day training session at the National Football Center in Paju, Gyeonggi.

The KFA announced a day earlier that midfielder Yoon Bitgaram will replace Ki Sung-yeung. Ki’s Scottish Premier League club Celtic FC had been reluctant to release him for the non-FIFA sanctioned event.