Rookie player trains for first shot on the mound

Rookie player trains for first shot on the mound 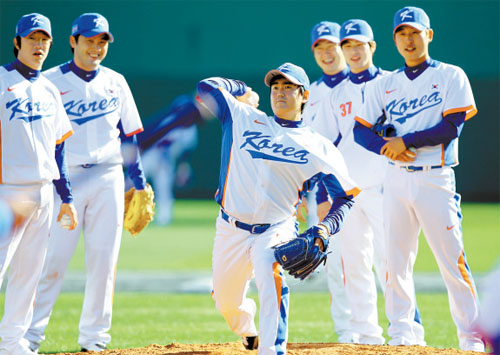 Kim Myung-sung, center, participates in a fielding drill with the national baseball team at Sajik Stadium in Busan earlier this week. By Lim Hyun-dong

Kim Myung-sung of Chung-Ang University is the lone amateur on the national baseball team. The 22-year-old pitcher, who is training with the squad as it prepares for the 2010 Guangzhou Asian Games, admits to being star-struck and inexperienced.

Yet he is known for being a hard worker who is enthusiastic about improving his game.

“I’ve been impressed with his work ethic and his willingness to learn from others,” said coach Kim Si-jin. “With a player like Myung-sung, I want to teach him as much as I can.”

The national team is gunning for a gold medal and has assembled the best team possible for the upcoming Asian Games, where it is grouped with Taiwan, Hong Kong and Pakistan. It is quite different from the Japanese team, which consists mostly of amateur players.

“It feels like I’m watching popular entertainers,” said Kim Myung-sung. “Everything feels different, and since I have to train with skilled veterans, I have a lot on my mind. I have so many pointers to pick up that I often don’t even remember what I’ve done during practice.”

Despite being the same age as fellow national team pitchers Yang Hyung-jong of the Kia Tigers and Lim Tae-hoon of the Doosan Bears, Kim is the rookie on the squad. Kim played with current Doosan Bears players Lee Yong-chan and Lee Doo-hwan at Jangchung High School but failed to attract much interest from KBO squads. Kim decided to hone his skills at the collegiate level and became the ace of Chung-Ang University’s starting rotation.

Kim was drafted fifth overall by the Lotte Giants at the annual amateur draft earlier this year.

“It’s an honor to even be approached by the veteran players,” said Kim. “Lee Dae-ho gave me a word of encouragement, and others have also been friendly. It’s a big boost of confidence.”

Kim does not get top flight velocity on his pitches but focuses on achieving precise control to strike out batters.

“My fastballs range in the low to middle 140-kilometer-per-hour range [87 to 90 miles per hour],” Kim said. “I think stepping onto the mound with an air of confidence is important.”

If he performs well at training camp, Kim may get to try out his pitches during the Asian Games against weaker teams like Hong Kong and Pakistan.