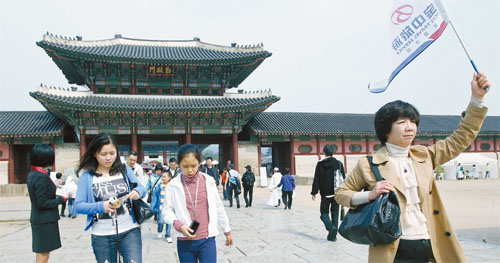 A group of Chinese tourists lined up at a busy shopping district in downtown Seoul, chatting and laughing as their flag-waving guide hollered instructions just before they were to try their hand at making the famous Korean side dish kimchi.

Such a scene isn’t out of the ordinary in this city - in fact, it’s becoming all the more common as the number of tourists from the neighboring country visibly increases.

“We came here because of the Korean Wave,” said Xiao Yongqiang, one of two Chinese guides leading the group of 17 tourists from Guangdong on China’s southern coast. “We want to see, experience and buy everything that’s in Korean dramas.”

Some Chinese tourists have canceled trips to Japan and instead headed to Korea since a diplomatic row in September inflamed anti-Japanese sentiment in China.

“We have yet to receive statistics for September, but I heard tourism to Japan has dropped significantly,” said Choi Hyo-jung, a publicity official at the China National Tourism Administration’s branch in Seoul. “Korea may have surpassed Japan in terms of tourist arrivals from China.”

The number of visitors from China has grown at a surprising pace in recent years - as much as 45 percent year-on-year during the January-August period - prompting Korea’s tourism industry to shift its marketing focus from Japan to China.

Stores in shopping districts like Myeong-dong have added Chinese-speaking staff, their headquarters are using Korean celebrities popular across China and Southeast Asia in advertisements, and glitzy duty-free stores are dropping European luxury brands to give more space to Korean cosmetics chains that are less expensive but more popular in Asia.

Korea ranks among the top five destinations for outbound Chinese tourists, trailing only Hong Kong, Taiwan, Macau and Japan, according to statistics from the China National Tourism Administration.

Visitors from China spend more than Japanese tourists while in Korea - $1,547 on average compared to $1,084, according to data from the official Korea Tourism Organization.

The Seoul Chamber of Commerce, an association of businesses operating in the capital, opened a free Chinese language course in September for merchants working in Myeong-dong and Namdaemun and Dongdaemun markets, hoping to hone their communication skills.

China’s growing profile has driven Korea to ease visa regulations for Chinese tourists and rush to resolve the shortage of accommodations.

“Most of our customers are still Japanese, but I’ve been noticing a visible increase in Chinese customers,” said Kim Ye-sook, a proprietor of an eyeglass store at Namdaemun Market who was one of about 30 people attending the class, which is held three times a week. “I can see that the tide could change in three to four years, and I am preparing myself,” she added. Yonhap