A couple of cyclists pedal in for photo exhibit

A couple of cyclists pedal in for photo exhibit 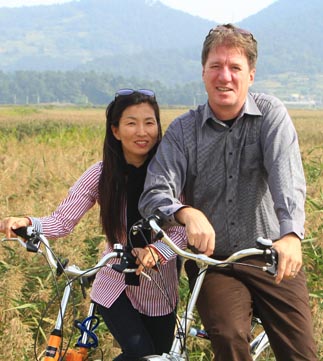 Kim Mun-suk, left, and Eric Wehrheim came to Korea last week to speak about bicycling around the world. Together, the two have traveled 50,000 kilometers across 23 countries and five continents. [JoongAng Ilbo]

The first birthday present Kim Mun-suk received from her husband Eric Wehrheim after the two married in 1994 was a bicycle.

And what began back then as a hobby has since become a mission to promote the charms of traveling the world by bicycle.

“All you need is a dream, your will and a bike. Then you should be able to travel the world,” Kim said.

The couple has now traversed some 50,000 kilometers (31,069 miles) across 23 countries on five continents by bicycle.

Earlier this month, they were in Seoul to launch an exhibition of photos from their travels. The photos - about 100 in all - were all taken by the couple.

Their collection includes images of the Iguazu Falls in Argentina, the Salar de Uyuni, or the salt plains in Uyuni, Bolivia, Machu Picchu in Peru, the Galapagos Islands in Ecuador, and rodeo shows in Chile, among others.

Last week, the pair gave tips and advice on traveling the world by bicycle at a three-day event that kicked off Oct. 22 and was held on the sidelines of the World Bike Show at Kintex in Goyang, Gyeonggi.

“Because we travel by bicycle, it’s easier to come into close contact with local people, culture and traditions,” said Kim. “Of course, there are also cost and health benefits.”

Five years after they married, they came to Korea after a long bike trip that started in Germany on July 21, 1998.

Sixteen months and 15 countries later - after a 14,000-kilometer trip through Italy, the Czech Republic, Kenya, India and the Philippines - the duo arrived at Kim’s family home.

Kim was hoping to show her family, who had opposed her marrying a foreigner, how happy she was in her new marriage.

The visit was an emotional one, as Kim eventually reconciled with her father, who had especially strong objections to her marriage.

Kim and Wehrheim documented their trip in a book titled “The Bicycle Trip of Old Tree and Ant.”

Kim is just 155 centimeters tall (5 feet, 1 inch), whereas Wehrheim is 196 centimeters. The difference in their height led them to adopt to the nicknames.

But this is not the only book that the couple has authored. After their 19-month trip through South America back in 2005, the two wrote “Over the Andes, Exploring South America.”

“It was an amazing experience. At one point we were escorted by local police on the roads in Peru and Colombia,” Kim recalled.

The couple has fond memories of even their most trying experiences - like carrying their bicycles and camping equipment, weighing 80 kilograms (176 pounds), and climbing the 4,700-meter (15,420 feet) high Andes.

So what does bicycling mean to this adventurous couple?

“It’s life,” Kim said, adding that riding a bicycle takes a person through ups and downs and sometimes keeps you on level ground - just as in life.

Her husband, meanwhile, said that for him, the bicycle represents freedom, because it allows you to get up and go anywhere, anytime.

The two agreed that the bicycle is also a symbol of love that binds them together.

“If ever you’re interested in how people in other parts of the globe live and love, just plan a bicycle trip,” the couple said. “It’s hard, but just as rewarding.”