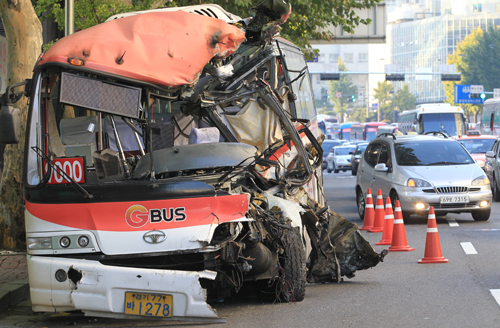 The left side of a #9000 bus after being crushed in a collision with a tour bus at the intersection of Euljiro 2-ga, central Seoul, yesterday. The accident caused severe congestion during the morning rush hour. [YONHAP]

A tour bus filled with elderly Buddhists on a temple tour jumped its lane in the heart of Seoul and crashed into an oncoming intracity bus yesterday morning, killing the tour bus driver and injuring 28 passengers.

The accident occurred at 6:53 a.m. at the intersection of Euljiro 2-ga, central Seoul, in front of the Industrial Bank of Korea headquarters. The tour bus, bringing devotees from the Geumsun Temple in Jongno to the Jeongam Temple in Jeongseon, Gangwon, swerved out of the bus-lane into oncoming traffic to overtake the vehicle ahead and smashed into a #9000 bus heading for Cheonggye 2-ga.

The number of injured was high because the tour bus, run by Inet Tour Co., Ltd., was loaded with elderly passengers. The injured were sent to nearby hospitals, but the 61-year-old tour bus driver, surnamed Choi, died at the hospital. The other bus driver was seriously injured but is recovering. Another 27 people suffered bruises and fractures, but are not facing life-threatening injuries.

The police said, “The crash took place because the tour bus was driving over the center line to outrun the car ahead. We are investigating the exact cause of the accident through witnesses.” Whether the driver was drunk has yet to be determined, according to police.

The areas around Namsan Tunnel No.1, Jongno and Euljiro suffered severe congestion after the accident.