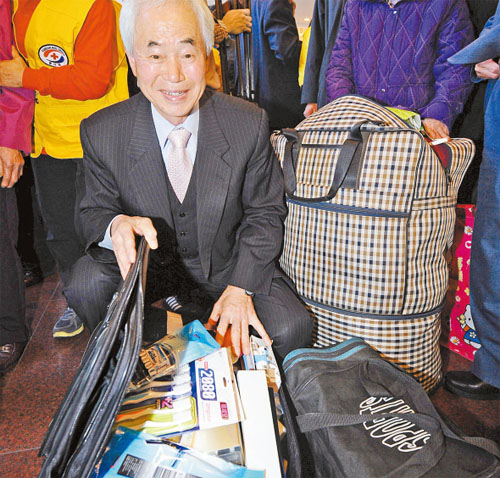 Tae Ho-gyun packs toothpaste and toothbrushes in Sokcho, Gangwon, to give to his brother from North Korea at a family reunion today. [NEWSIS]

Imagine leaving a pregnant wife in the middle of war with a promise to return - and then meeting your then-unborn daughter nearly sixty years later as an old woman.

That’s how time has slipped by for Han Ja-ok, 83, who was drafted to fight for North Korea when the Korean War broke out in 1950.

“My daughter was unborn when I was taken to fight in the war,” said Han, who will attend a reunion of families divided by the war in November. “This is the first time I will be seeing her.”

Han, originally from South Pyongan, was captured by South Korean troops in North Chungcheong, and he believed his wife and child were lost to him forever. He currently lives in Busan and will be meeting with his 59-year-old daughter and her husband. His wife refused to take part in the reunion.

Han says he still doesn’t know what he will say to his daughter.

And starting today and through Nov. 1, 97 North Koreans will be reunited with 447 South Korean relatives from whom they were separated during the Korean War.

From 2000 to 2007, an average of two reunions were held each year at the Mount Kumgang resort until the meetings were halted in 2008 when a South Korean tourist who wandered away from the main resort buildings was shot and killed by a North Korean soldier.

Since 2000, nearly 17,100 separated family members have met face-to-face, and 3,748 have taken part in video-conference reunions, according to data from South Korea’s Ministry of Unification.

But many of the separated family members are getting old and nearing the end of their lives. As of late September, 128,232 South Koreans were registered for reunions with the Red Cross, but only 83,292 are still alive. The South Korean government believes there are 600,000 to 700,000 South Koreans who have family members in the North.

Seoul wants to regularize the reunions and hold them on a bigger scale so that more families can be reunited before elderly members die. One South Korean candidate had to cancel her slot in the current round after her North Korean cousin died. Another round of Red Cross talks will be held Nov. 25 to discuss reunions and other issues.