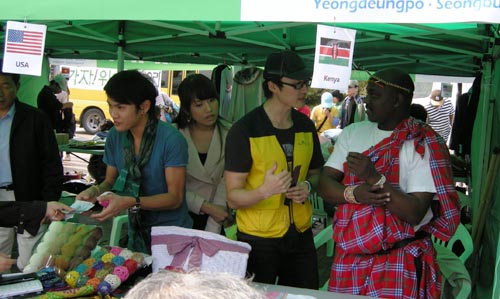 
Stalls at the Seoul Folk Flea Market near Sinseol-dong Station overflow with LP records, all kinds of clothes, bike gear, hiking equipment, artwork and stacks of toys. This incredibly diverse collection of items once loved by their owners is just a glimpse of the bargain-hunting opportunities that exist in Korea’s capital.

“One of the fun things about going to a flea market is to see all the colorful items and people haggling,” said Mohammad Elhalawani, an employee at the Egyptian Embassy in Korea.

Elhalawani was walking through the Seoul Folk Flea Market with his family to catch the sights and sounds, as well as possibly find some items of interest.

“The stuff vendors sell is usually very cheap so I can make a good deal. Today, I bought a watch, some CDs, and a few pairs of shoes,” Elhalawani said, adding that he enjoys spending time at flea markets because he finds worth in things others are eager to get rid of.

For both vendors and customers, it is an opportunity to browse the market and make deals. The real treat for most is finding a hidden gem at a bargain price.

Flea markets for foreigners have been jointly organized by the Seoul Global Center and the Seoul Folk Flea Market for several years now and they are designed to expand exchanges between Seoulites and expats in a friendly atmosphere.

For foreign sellers, making a fortune is not the ultimate goal. It might be to meet new friends, socialize with current ones or simply clear out old items. Whatever the case, it is a good place to get deals on books and household goods.

Also, a percentage of all proceeds goes to charity.

On Oct. 17, expats in the spirit of sharing gathered for the annual WeAJa charity flea market. The event was hosted by the Seoul Metropolitan Government and the JoongAng Media Network at four locations around the country.

Koreans and expats in Seoul, Daejeon, Jeonju, and Busan put their secondhand items up for sale, while the event also garnered donations from celebrities and high-ranking officials.

Minister of Unification Hyun In-taek donated a piece of the Berlin Wall, which he said symbolized his wish for the unification of the two Koreas, while Shin Min-ah gave a dress she wore on the television show “My Girlfriend is a Nine-tailed Fox.”

Besides the Seoul Folk Flea Market, there are many other flea markets you may want to check out in Seoul. 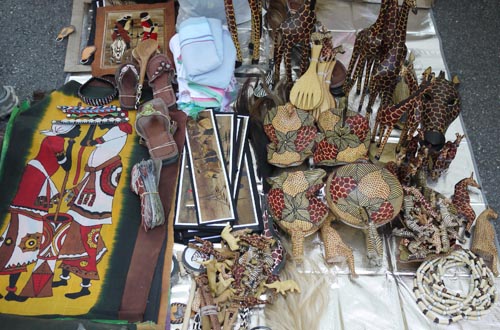 Crafts from Kenya are displayed at the flea market. Provided by Seoul Global Center

Daehangno in central Seoul is usually frequented by Koreans who want to quench their thirst for culture and plays. It is chock-full of small theaters and concert halls. But this area is also well known among the Filipino community - the Daehangno Philippine Market has become a popular meeting place for Filipinos in Seoul.

More than 2,000 Filipinos gather every Sunday to meet friends, or to buy or sell groceries, food, magazines and CDs, among other things.

The market has attracted not only Filipinos, but other expats and Koreans.

Here you can experience Philippine culture as well as taste its famous cuisine. Food sold at the market include lumpia, a Filipino fried spring roll filled with pork and vegetables, as well as pancit canton, a noodle dish with vegetables, chicken, pork or shrimp.

The market is held every Sunday, from noon to 6 p.m.

But the Daehangno Philippine Market faces tough times ahead, so if you want to experience it, you should go sooner rather than later. Jongno District officials are planning to cut the size of the market in half because of complaints from locals.

The market sprang up after a Filipino priest started conducting service in Tagalog at Hyehwa Cathedral in 1996.

The market is already half its original size; it used to be 100 meters (330 feet) long. It will be cut in half again after the district’s plan is implemented.

Directions: Take subway line 4 to Hyehwa Station and go out exit 1. Walk straight until you reach Dongseong Middle & High School on the right.

At the Hongdae Hope Market, you will find a variety of unique items including handcrafted accessories, shoes and bags with hand-drawn designs by university students.

Most of the vendors and artists are students of Hongik University.

Musical performances, portrait artists and caricaturists can make an afternoon at the market an interesting experience.

The participation fee is 10,000 won, and the market runs from March to November from 1 p.m. to 4 p.m. every Sunday at the playground across the main entrance to Hongik University.

For more information about the Hongdae Hope Market, visit cafe.daum.net/hopemarket.

Directions: Get off at Hongik University Station and take exit 6, walk straight to the four-way intersection, make a left, continue until the end of the street, make a right and then follow the uphill road on the right.

The Hwanghak-dong Flea Market is located near Dongdaemun and offers a wide variety of secondhand products.

It was the first market of its kind and is home to some 500 shops that sell a variety of used goods, including clothing, old bottles of whiskey, typewriters, walkmans, antiques and used electronics.

Directions: Take subway line 2 or 6 to Sindang Station and go out exit 2. Walk a few minutes towards Hwanghak-dong Office.

Seocho Flea Market is one of the largest flea markets in Korea and sells all types of used goods.

It is open for vendors from 8 a.m. every Saturday on a first-come first-served basis. Most sellers wait in line from 6 a.m. to get a good spot, so make sure to be there early.

Directions: Take subway line 3 to Yangjae Station, and go out exit 8. The market is on the left.

*Michelle Kang is the English editor at the Seoul Global Center. She can be reached at michyk@sba.seoul.kr