Learning to speak their mind

Learning to speak their mind 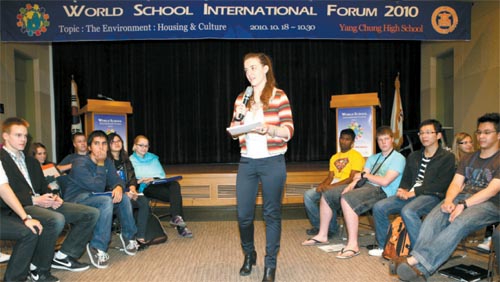 A foreign high school student expresses her opinion last week at a seminar tied to the World International Forum 2010, which was held at the Daekyo HRD Center in Siheung, Gyeonggi. By Jeon Min-gyu


Korea recently played host to guests from 20 countries. It wasn’t the G-20 Summit, which will be held next week, but the World School International Forum 2010, a network of about 20 high schools from around the world.

Yangchung High School in Seoul, the only member from Korea, hosted the event this year from Oct. 18 to Saturday. The forum - an annual event held since 1997 - was established by Kanto International Senior High School in Japan. There were about 130 participants, including 63 students and 22 teachers from 20 overseas high schools, at this year’s gathering.

The main event was a debate, which was held from Wednesday through Friday at the Daekyo HRD Center in Siheung, Gyeonggi, under the topic of “The Environment: Housing & Culture.” Students discussed how the housing culture of each country has been transformed with development and looked at the different types of cultures that will emerge amid globalization.

In a country where offering up individual views is still unfamiliar, Korean students seemed able to collaborate with colleagues from different backgrounds. “In an extended family, diverse interests can coexist, and [family members] collaborate and learn from each other,” said Choi Ui-jin, a student at Yangchung High School, in a confident voice. Choi was working with friends from the United Kingdom, India and Canada.

By participating in the discussion, Choi said he learned that taking notes is not enough for Korean students to make it on the global stage. “In other countries, a culture of discussion is well developed,” Choi said. “Thus, students know what they should do [in the process of discussion]. But, in our case, we usually hit the books and take notes. It was the same case for me, so breaking the ice was not easy.”

Simon Heckhois, a 17-year-old student from Germany, said, “In Germany, [in classes] we always have to discuss things and debate, so I know what this process is about. ... Before I came here, My views were quite Western. Now I have to rethink everything.”

Before the debates, the students visited traditional houses in Andong to experience what the old Korean homes were like. Afterward, they had a home stay with Yangchung students to learn what life is like in modern households and also toured Seoul with their host families. In this sense, the forum played the role of introducing Korea to the world.

Michael Collett, 16, of South Africa, said, “We had the privilege of going to Andong, and I was lucky to stay a night at one of the traditional houses there. Sleeping on the heated floor was quite amazing.”

Lee Chun-ho, a teacher at Yangchung, said: “It is not just about introducing Korean culture but making [foreign students] fall in love with Korea.”