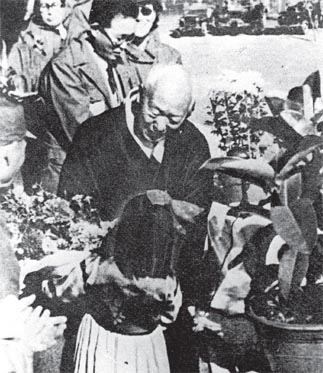 After ROK and U.S. troops seized Pyongyang, President Syngman Rhee visited the city on Oct. 30, 1950. In the photo, a girl delivers flowers to Rhee. [JoongAng Ilbo]

Col. Kim Jeom-gon of the ROK 12th Regiment was in charge of cooperating with the U.S. Airborne Division. The mission we were about to undertake required punctuality and a quick response to changes that occurred along the way. Colonel Kim was a bold and charismatic leader under pressure.

We headed towards Suncheon, South Pyongan, which was roughly 60 kilometers (37 miles) northwest of Pyongyang.

Along the way, I wondered how my men would deal with enemy captives.

We had already experienced a regrettable incident on Oct. 19, 1950 as we entered Pyongyang. While enemy troops were retreating, there were soldiers and snipers in buildings throughout the city causing problems for ROK and UN troops. A regimental commander who was standing nearby got shot by one of the snipers. Our men responded promptly by shooting at the window from where the shot rang. With the regimental commander dying on the ground, the men under his command were overcome with emotion and had a difficult time containing their anger. Despite the enemy combatants waving their arms in surrender, our men did not stop shooting and the enemy soldiers began to drop one by one.

It was around this time when Col. William Hennick, commander of the 1st Battalion, 10th Field Artillery, began to shout in anger: “General Paik, how could you allow your men to shoot at the surrendering enemy? If you continue to fight in this manner, I will refuse to cooperate with the ROK Army.”

I had momentarily forgotten that it was our duty to protect surrendering soldiers. I immediately told my men to cease fire and many of them asked in exasperation how I could protect the enemy, which had just killed one of our own men. It was not easy to stop emotional soldiers holding guns in the heat of combat, but I emphasized the need to keep surrendering enemy troops alive.

On our way to Suncheon, we saw truck loads of North Korean prisoners of war going the opposite way. It was my job to keep tabs on the prisoners and send them to prisons that had enough space to take them.

The Americans also used 90mm antitank guns and 105mm artillery guns, and I heard a 105mm artillery gun was dropped into a battle zone using a parachute for the first time. The ROK 1st Division met with the British 27th Brigade on the way to help with the cooperative effort. We were also able to rescue American prisoners of war who had been left behind by the fleeing North Koreans.

We returned that evening to our command post at an agricultural high school in Yongbyon, North Pyongan. It was our objective to push further north towards Supung Dam. We could drive Kim Il Sung and the North Korean troops from the Korean Peninsula if we could manage to push them north towards the dam.

We crossed the Chongchon River as the sun began to set. As I began to wonder whether we would be successful in advancing further north, I got an uneasy feeling that the enemy troops would not back off so easily.

We were now looking to form a defensive line along the Chongchon River. The area had traditionally been a strategic military area, and there were many benefits to bunkering down in a defensive line along the river, as our overall goal was to advance further north. We were now fully aware of the North Korean military’s collapse, having witnessed it firsthand on our venture north, but we did not have any detailed information.


Rough mountainous terrain lay ahead for ROK troops after crossing the Chongchon. We had no way of knowing how the North Koreans would defend the area in anticipation of our advance. If we build a strong defensive line along the river, we could send reconnaissance missions to survey the area and fight our enemies accordingly. Under such circumstances, we might have had a better chance.

In retrospect, our mission to advance north in October of 1950 was a total failure. We had failed to anticipate the participation of the Chinese People’s Liberation Army. When things are going well, you can stumble upon unexpected positive results. Likewise, things can quickly turn even worse when you are in a bad situation. There is a Korean proverb that says, “You can break your nose by falling backwards.”

General MacArthur’s leadership and decision-making abilities were well-respected and he also played an instrumental role in preventing the communist North Koreans from seizing the Korean Peninsula during the Korean War. But his confidence and charismatic ways eventually led to several minor mistakes in judgment.

One of the most questionable decisions was General MacArthur’s decision not to have the U.S. Army X Corps join the fight after the Incheon landing. Instead, he had the U.S. Infantry 7th Division, which was under the 10th Army’s command, sent to Busan. The U.S. Marines involved in the Incheon landing were shipped to Wonsan. The reason was to prepare for a second amphibious operation on the east coast.

Even though the Gyeongbu railway line had been used by U.S. troops as the main supply line, with the U.S. Infantry 7th Division down on the southern part of the line, a proper and efficient supply to the U.S. 8th Army could not take place. If the U.S. Army X Corps had joined the action instead of partaking in another mission, the North Koreans could have been put under heavier pressure.

The Chinese People’s Liberation Army joined the war later, but they were still undecided at the time.

From the ROK Army’s point of view, it would have been safer and more efficient for General MacArthur to form a strong defensive line along the Chongchon River, backed by artillery and ship guns. Perhaps such decisions were part of the reason why I felt nervous crossing the river. The roads were peaceful and void of any enemy troops. But my intuitions were right, the Chinese People’s Liberation Army was hiding out nearby.

President Syngman Rhee had planned a visit to Pyongyang on Oct. 25, but it was later rescheduled to Oct. 30. It was around this time that I interrogated a Chinese soldier for five days and began to feel stronger about the reality of China joining the war in huge numbers.

Roughly 100,000 people gathered to witness President Rhee’s speech at Pyongyang City Hall. It was an inspirational speech stressing the importance of a democratic Korea. The people accepted President Rhee’s speech with loud applause. Based on what was taking place in front of Pyongyang City Hall, one could have guessed a united democratic Korea was in the imminent future - but such thoughts could not have been further from the coming reality.

I returned to the front lines only to meet a bevy of Chinese troops. We were no match for the Chinese. Outnumbered and with no other viable option, we retreated in haste. The U.S. Army did not fare much better. It lost the Battle of Unsan, then lost again at Kunuri. When the dust settled, the Chinese had overtaken Pyongyang. It was an unexpected turn of events for the ROK and U.S. troops, who were hoping for an quick end to the war.

The winter in the northern part of the Korean Peninsula is especially cold, but that particular winter felt even colder. I think it was because we had failed to realize our dream of reuniting Korea and instead, had allowed the enemy to regain control of Pyongyang.