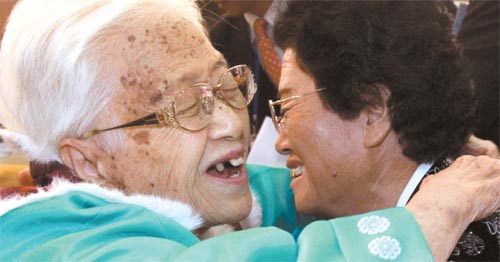 Kim Rye-jeong, left, a 96-year-old mother from South Korea, reunites with her North Korean daughter, Wu Jong-hye, 71, for the first time since 1950, at the Mount Kumgang resort in North Korea on Saturday. [Joint Press Corps]


Kim Rye-jeong, a 96-year-old South Korean mother, choked up with tears when she met her 71-year-old daughter Wu Jong-hye on Saturday for the first time since the two were separated in 1950. Wu was 11-years-old when Kim lost contact with her when she fled to the South during the Korean War.

“I could only see you in my dreams,” said Kim while hugging her daughter from the North. Kim, who requires a wheelchair to get around, is the oldest South Korean participant in the fresh round of family reunions, which began over the weekend.

It was the first family reunion in 13 months, and tears flowed as elderly North and South Koreans met for the first time since being separated during the Korean War, according to a pool report from Mount Kumgang in the North, where the gathering took place.

North Korean Li Jong-ryol, 90, only had enough time to give his son the name Min-gwan before the two were separated in 1950. Lee Min-gwan was only 100-days-old when his father went missing, and despite not remembering his dad, Min-gwan got teary-eyed when his father held his hands and told him, “I never forgot you a single day over the past 60 years.”

Wu and Li aren’t the only stories to come out of the Mount Kumgang resort this weekend. Ninety-five other North Koreans and 436 of their family members in the South also got the once-in-a-lifetime opportunity to see their long-lost loved ones. The three-day event closes with a farewell ceremony this morning, before all family members return to their homes in the North or South.

A second reunion will start Wednesday at Mount Kumgang when 96 South Korean applicants meet 207 family members from the North.

North Korea sought to ease tensions with South Korea by agreeing to the family reunions, in a bid to restart a lucrative tourism business at Mount Kumgang.

But the two Koreas have yet to agree on institutionalizing family reunions - North Korea wants inter-border tourism to restart first - with many Koreans yet to meet their separated families. An estimated 83,000 people in the South, mostly older than 70, still haven’t met their counterparts in the North.

Meanwhile, the latest family reunion also brought to light the unsettled issue of South Korean prisoners of war, as four of the North Korean participants were once South Korean soldiers. The four, including Li, were all declared dead by the South Korean government in 1957.

“Since four South Korean soldiers believed to be dead have been confirmed to be alive, we plan to update information on POWs in the North through an additional investigation,” a government official was quoted as saying by Yonhap news agency.