A walkabout downtown draws 10,000 to festival

A walkabout downtown draws 10,000 to festival 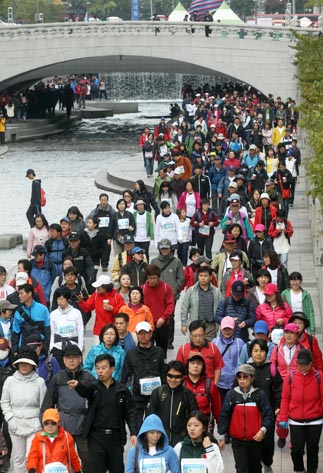 Participants of the Hi Seoul World Walking Festival 2010 stroll by the Cheonggye Stream yesterday amid the hopes of successful hosting of the G-20 Summit in November. [YONHAP]

The weekend had the typical crispy feel of fall, rendering perfect conditions for chilling out by walking around some tourist attractions in the heart of Seoul. That was what more than 10,000 Seoulites did at the Hi Seoul World Walking Festival 2010 on the last weekend of October.

Amid the hopes of Korea successfully hosting the upcoming G-20 Summit on Nov.11-12, the walking event was sponsored by the Seoul Metropolitan Government, Korea JoongAng Daily and JoongAng Ilbo.

On Sunday at 10:00 a.m., participants embarked on a 12-kilometer (7.4-mile) journey from Seoul Plaza to Cheonggye Stream and Seoul Forest. Around 10,000 citizens applied via Internet, and a thousand people joined in at the site.

Kim Young-seon coming with her husband and their five-year-old daughter said, “We joined the walk to make memories with our family, and to become healthy. It’s good to have a chance to stroll around while savoring the scenes of Seoul.”

Seoul Mayor Oh Se-hoon encouraged the participants at the event saying, “Walking well is as important as eating well. I hope [the participants] have an exciting walking experience within the refreshing air of Seoul.”

Lee Na-hyuk, a 28-year-old man, grinned when saying, “I came here to have an unusual date with my girlfriend.”