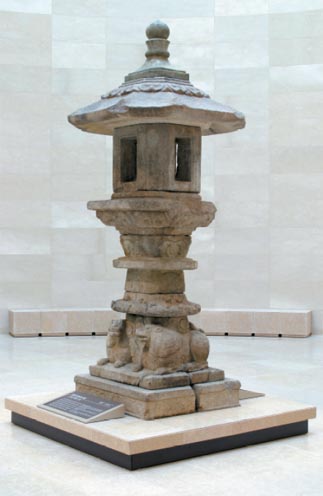 
Although at first glance it may look like a typical stone lantern from the Unified Silla period (668-935), this two-lion stone lantern is believed to have been produced during the early Goryeo Dynasty (918-1392) when Godal Temple was at its most prosperous. It is the position of the lions, crouching rather than standing, that makes the lantern such a novel find. The position of the lions is typical of similar lanterns from the Goryeo period.

The body of the lantern was excavated at Godal Temple in 1959 and moved to Gyeongbuk Palace. The pedestal and roof stone were discovered during a full excavation of Godal Temple on June 9, 2000, making the statue complete. The lantern is currently housed at the National Museum of Korea.