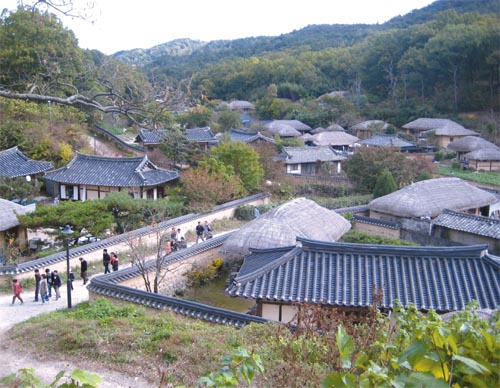 Visitors tour Yangdong Folk Village, which was designated as a Unesco World Heritage site in July 2010.


Persimmon-tree branches laden with the bright-orange fruit arch down over dark grey giwa roof tiles, set against a backdrop of budding fall color in reds, yellows and tans.

Although this scene is common at sites throughout Korea, perhaps one of the most historic places to take it all in is in Gyeongju, North Gyeongsang, which was once the capital of the Silla Dynasty (57 B.C.-A.D. 935).

The city is known as a living museum for the wealth of cultural artifacts dotting its fields and hillsides, but it is also quickly becoming a regional hub, a characteristic that was highlighted by its recent role as host of a meeting among finance ministers and bank leaders, held in advance of the upcoming G-20 Summit in Seoul.

The city recently celebrated two milestones: the designation of Yangdong Folk Village as a Unesco World Heritage site in July and the launch of direct express-train service to and from Seoul, which started yesterday. This puts Gyeongju less than two hours away from Seoul, which the government is hoping will boost tourism in the region. 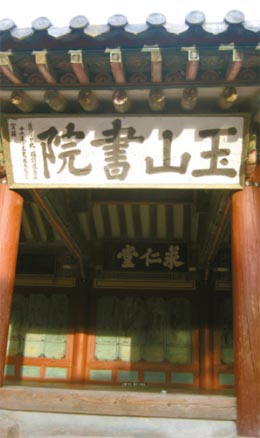 Signboards at Oksan Seowon, a site that is on the Unesco World Heritage list, were written by Joseon-era scholars.

Gyeongju was once a popular tourist destination but as other sites gained attention, it began to fall out of favor. The tourism organization hopes the event will help spark renewed interest in the region.

“Gyeongju was the number one tourist destination in the 1970s, but as the number of tourists declined in the 1990s, its image became somewhat stagnant,” said Shim Hye-ryeon, manager of the Korea Tourism Organization’s tourism-culture improvement team. “Through this event, we are trying to show all of Gyeongju’s hidden jewels.”

Since the 1990s, Gyeongju has become known among Koreans as a destination for school field trips to historic places such as Bulguk Temple, the large stone Buddha in Seokguram Grotto and the 7th century astronomical observatory Cheomseongdae.

But as Gyeongju recently added several Unesco World Heritage sites to its cache of attractions, tourism officials began sprucing up the area to make it more tourist-friendly.

A stone carved into a human likeness sits in front of the tomb of King Heungduk, the 42nd king of the Silla Dynasty. By Lee Sun-min

They have installed more lights for nighttime tours and added roof tiles to modern structures, including at some gas stations in the city.

Yangdong Folk Village, which was once the home of several Joseon Dynasty Korean aristocrats, also known as yangban, is one such Unesco site. It is about 20 kilometers (12.5 miles) from Gyeongju and surrounded by Mount Seolchang.

Yangdong is not as well-known as the nearby Hahoe Village in Andong, which was also designated a Unesco World Heritage site in July, but that might just be part of its charm.

The 500-year-old village is known for having two head families: the Yeogang Lee family and the Wolseong Son family.

It was designated by the Korean government as Important Folklore Material No. 189 in 1984.

There are about 54 giwajip (tiled-roof houses in which yangban lived) located on the mountain’s slope and about 110 chogajip (servants’ homes) closer to its base.

During the Joseon Dynasty, the head family’s house was built at the highest elevation compared to other houses in the village, and other families were supposed to construct their homes lower than the head family’s to show respect.

The village has several historic sites, including Tonggamsokpyeon (National Treasure No. 283); Muchumdang (Treasure No. 411), the head-family house of the Yeogang Lee clan; Hyangdan (Treasure No. 412), which King Jungjong (1488-1544) bestowed on the Lee clan so that Confucian scholar and politician Lee Eon-jeok (1491-1553) could take care of his sick mother while working as Gyeongsang governor; and Seobaekdang (Important Folklore Material No. 23), which is the head-family house of the Wolseong Son clan.

Another Unesco World Heritage site in Gyeongju is Oksan Seowon. It was a local private academy originally built by the students of Lee Eon-jeok in honor of the Confucian scholar. The academy was also used for ancestral rites and ceremonies.

Oksan Seowon is famous for signboards that are affixed under building roof tiles - not for their restrained beauty but more for the people who created them.

The lettering on a sign that reads “Oksan Seowon” was written by Chusa Kim Jeong-hee (1786-1856), who drew the first map of the Korean Peninsula. The sign for Guindang, study hall, was written by Han Seok-bong (1543-1605), one of the most well-known calligraphers of the Joseon Dynasty.

“It’s an honor to see something like this. I’m glad that they made it available to people,” said Eric Carpenter, a visiting professor at Kyungsung University. “You can [experience this] legacy [here]. And when they were doing all these things, like setting up this institution, they may not have thought about how important it was. I think it would be very nice to study here to reflect upon nature, and reflect upon [what] made people think. I would love to study here.”

At the conclusion of the two-day tour, participants dined at Silla Millenium Park, where they reminisced about their short trip.

“It’s fantastic, mainly because I’m trying to imagine the history of that period,” said Martha Ortiz de Rosas, the Ambassador of Mexico to Korea. “I’m enjoying what I have seen. You have not just the history, but also beautiful scenery with the lake and all the mountains, and this time of the year, the color of the leaves.”