‘Check it Out’: Hangul featured in new will.i.am video

‘Check it Out’: Hangul featured in new will.i.am video 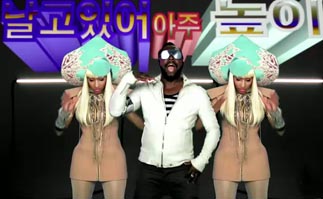 The recently released music video for “Check it Out” by will.i.am of the Black Eyed Peas and Nicki Minaj has attracted interest among Korean fans for its use of Hangul throughout.

The video’s director is Rich Lee, a Korean-American who has worked on music videos for popular artists like Eminem (“Not Afraid”), The Pussycat Dolls (“Hush Hush”) and the Black Eyed Peas (“Imma Be” and “Rock That Body”).

Lee has also worked on visual effects for films in the “Pirates of the Caribbean” series, “Constantine” and “Minority Report.”

Check it Out samples the 1979 hit “Video Killed the Radio Star” by The Buggles.

Meanwhile, will.i.am has project regarding Korea, as a producer on 2NE1’s the new album.