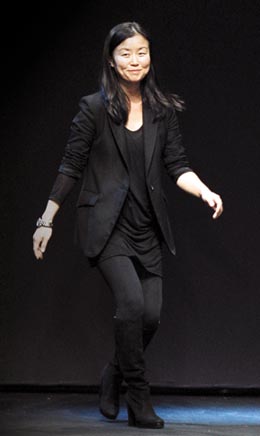 Signaling a breakthrough for influential ethnic Asian designers in the United States, Richard Chai, Jason Wu and Alexander Wang were given best new designers honors in June by the Council of Fashion Designers of America.

It marked the first time that all three awardees were Asian-American. Their success - of Korean, Taiwanese and Chinese decent, respectively - exemplifies the strides Asian designers are making in the U.S.

The CFDA is an annual competition held with Vogue, the fashion magazine, to help emerging designers break into the businesses.

Over the years Chung has persevered when most would have thrown in the towel. She has not only survived in the competitive world of fashion, but has achieved acclaimed success.

Just as important, Chung’s fashions have been a hit both on the runway and in retail stores.

“The response from [dressing] Kristen Stewart is phenomenal. I can’t believe how much presence she has. Not only among younger but also older women,” Chung said in an interview at a hotel in southern Seoul on Oct. 23.

In the interview a day before her 2011 Spring/Summer Seoul Collection runway show, Chung talked about her transition from an emerging to established designer and taking her business to the next level.

“I am not an emerging designer, and I don’t want to be emerging anymore,” she said. “It was wonderful when I was emerging, because so many editors and retailers were paying attention.

“Now we are focused on our business in terms of growth potential and how we are going to get to the next level. I want to create a small but global company, and this year is very important for us,” the 37-year-old said. 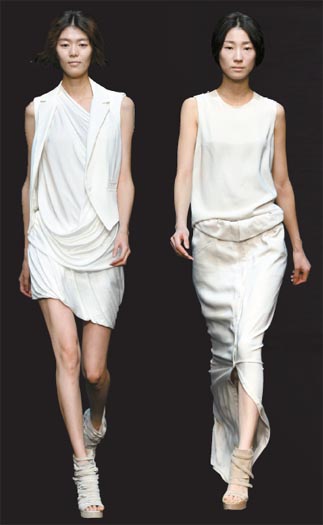 Doo-ri Chung’s latest collection reflects the minimalist trend that has made a comeback this fall. Provided by Seoul Fashion Week

While releasing her collections at New York Fashion Week twice a year and in Seoul once a year, she launched her secondary, lower-priced label Under.Ligne last year.

Under.Ligne - pronounced “Under Line” - has been a success so far. All dresses are priced under $300, and in just a year, 150 Under.Ligne outlets have opened around the world, with the biggest markets being the United States and Japan.

“The most important thing [about Under.Ligne] is to be price competitive and of good quality,” she said. Unlike her new label, by the time her high-end Doo.Ri collection reaches Korea and many other Asian countries, prices are 40 percent higher than in the United States, largely because of taxes and duties. Under.Ligne has not yet been launched in Korea.

Chung thinks her Under.Ligne collection, which picks up her old signatures, has more potential for global expansion, and her main focus has shifted to the new label.

She explained that her latest ready-to-wear collection for Doo.Ri was inspired by Paolo Roversi’s photographs of model Guinevere Van Seenus 12 years ago. The 2011 Spring/Summer collection unveiled at New York Fashion Week in early September was featured at the Seoul Collection on Oct. 24. The collection’s white and ivory hues were taken from Roversi’s photographs and Guinevere’s fair skin - pale enough to bring to mind ghosts.

But she had to improvise for her Korea show. “I had to change not only the makeup, but also a lot of the pants. Here, I have about five really tall Korean models, but for the most part, they are smaller than those in New York. Back there models were 181 centimeters [5 feet 11 inches] and taller. So all the pants have to be hemmed up here,” she said smiling.

Chung’s family immigrated to the U.S. when she was 4. In 1995, she graduated from Parsons School of Design with a Bachelor of Fine Arts in fashion. She worked for the late fashion designer Geoffrey Beene until starting her own label in 2001 in the basement of her parents’ dry cleaning business. The six years under Beene formed a basis for her present signature styles.

“My job was to give him [Beene] something that he was inspired by. I consistently used jerseys to drape and create a form that he would like, whereas Alber Elbaz [another designer under Beene now with Lanvin] went in a very couture, French way,” she said.

Although their styles were different, Beene would hone in on what he liked, she explained.

“So when I started my own business, naturally it [jersey draping] just became the easiest way for me. This is what I’m comfortable with and the language I know. If you gave me satin, it would be very difficult for me. I wouldn’t even know where to begin,” she said.

Chung largely attributes her success to Anna Wintour - the woman portrayed in the 2006 Hollywood hit “The Devil Wears Prada.”

“I think it’s great what the movie did. But she is so not like that. The reason my career took off was because of her. She saw that we have an old guard here that will eventually retire,” said Chung.

“What she didn’t want to happen was to see a vacuum in the fashion industry. So she nurtured the next group of designers and they are all these crop of designers you are seeing such as Jason Wu and Alexander Wang.”

Her ethnic origin does not come out in her designs, she said. “I never design with Asian elements in mind. Culturally, I still identify myself as Korean. I grew up in a very Korean culture. I still talk to my parents in Korean because we live with my grandmother. But design-wise, no. I think I design more universally. I don’t think I design like Koreans because I grew up here [in the U.S.”

But she can feel winds of change in the Korean fashion scene. “I am amazed every time I come to Korea. Koreans never look back. They always look forward. That’s really remarkable and that is one identity.”

In two years, she will celebrate her business’ 10th anniversary. And she has high expectations for the next decade. “When I started this business, I did not really think of it as a career. It was a passion and something I wanted to do. For me, surviving 10 years would have been an amazing success story,” Chung said.

“Our business has been around for eight years already, and now I know I am going to make [it to 10 years]. The other 10 years is about making it a viable global business,” she added.

Opening her own boutique - possibly in New York first, then in other cities such as Seoul - is one of her long-term goals. “We need to make our foundation strong before we can make an expansion. That’s where we are headed,” she said.