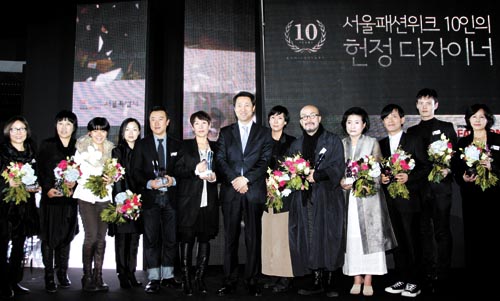 
This year’s Seoul Fashion Week was all about opening doors for Korean designers and international distributors interested in Korean fashion. New programs such as Tranoi Seoul, invitational designer shows and the Generation Next Hyeres gala show all fostered international exchange.

“The exchanges that we made at Seoul Fashion Week this year were fantastic and something very new,” said Michael Hadida, Tranoi organizer. Tranoi Seoul is the first global foray for Tranoi, an Italian fashion trade show that brings together industry designers, buyers and influential figures.

The Seoul edition brought together 10 international brands, along with 10 Korean designers, at the Kumho Culture Complex in Daechi-dong, Gangnam District, from Oct. 23 to 25.

“It was exciting to participate in Tranoi Seoul. Our brand, along with the buyers and fashion people at the event, were a perfect match,” said Andrew Kiernan, sales director for the shoe brand Unite Nude.

Many business tie-ups were formed. Designer Jung Wook-jun, known as JUUN.J, signed an agreement with London brand Poison Angel. Designer Sheen Je-hee’s collections will be featured at stores in England next year. E Suk-tae, known as KAAL E.SUKTAE, inked a deal with Paris’ L’eclaireur, Tokyo’s Joyce and Beirut’s Loft by Aspuces to have his clothing launched at their stores and is in the middle of negotiations with New York’s Seven New York, Singapore’s Actually Pte Ltd, and Germany’s Fashion Clinic.

The agreements formed during fashion week are estimated to be worth $80,000.

The Asia Fashion Week Symposium was held to foster exchanges among countries on Oct. 26. The symposium brought together representatives from four major Asian fashion weeks - Seoul, Tokyo, Shanghai and Singapore - to discuss current affairs and to follow-up on emerging trends in the fashion industry.

“If we emphasize the deep history and culture as well as the distinct regional characteristics of each four countries,” said Won Dae-yun, the head of Seoul Fashion Week’s organizing committee and chairman of Korea Fashion Association, “buyers will continue to take interest in Asia due to the attractiveness they may not find at New York, Milano, Paris and London.”