Feisty Clijsters too good for Wozniacki in Doha

Feisty Clijsters too good for Wozniacki in Doha 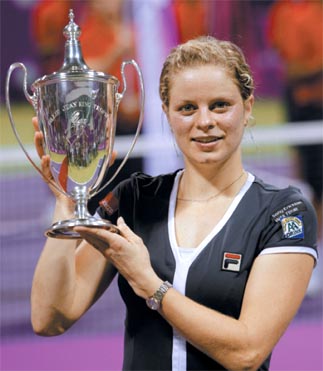 Belgium’s Kim Clijsters holds her trophy after she defeated Denmark’s Caroline Wozniacki during the final match of the Qatar WTA Championship. [AP/YOHAP]

Clijsters, who won the tournament for a third time after victories in 2002 and 2003, pocketed almost $1.5 million in prize-money for winning the title in the Qatari capital. The 27-year-old was up against an opponent seven years her junior but did not look a step off the pace, battling Wozniacki tooth and nail to seal a 6-3, 5-7, 6-3 win in a match lasting more than two hours at the Khalifa Tennis Complex.

“I felt like it was never going to end,” the beaming Belgian said in a courtside interview. “It was a really tough battle with some great shots, great tennis and great fitness. I’m glad that I won, obviously it’s disappointing for Caroline but I don’t know how many more years I’m going to keep doing this so. She has a great future ahead of her.”

Playing in her first tournament since winning the U.S. Open in September following an operation to remove a mole from her right foot, Clijsters came out guns blazing, breaking Wozniacki in the first game before building a 4-2 lead. Matching Wozniacki’s power from the baseline but bringing that little bit of shot-making imagination the 20-year-old Dane lacks, Clijsters secured the first set when her opponent sent a forehand far and wide.

Clijsters looked in complete command at 3-1 up in the second set, but wobbled. Wozniacki buckled down and battled back to level the match and with a spring in her step looked like the favorite to win the decider and cap a storybook season. Clearly Clijsters was not reading from the same script.

“It’s been a fantastic week for me,” said the Dane. “Kim just played amazing today and she deserved to win.”