Catch the Korean ‘Lullaby of Broadway’

Catch the Korean ‘Lullaby of Broadway’ 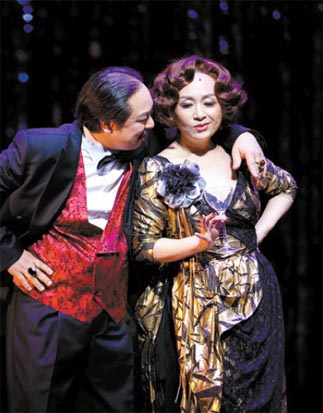 Jung Joung-hoon as Abner Dillon, left, and Park Hae-mi as Dorothy Brock perform in the Korean version of “42nd Street,” playing until Nov. 21 at the Charlotte Theater in southeastern Seoul. Provided by CJ Entertainment

Go to “hear the beat of those dancing feet” as the song from the iconic Broadway musical “42nd Street” suggests.

The Korean production of the award-winning musical is shuffling into the final month of its run at the Charlotte Theater in southeastern Seoul and closes on Nov. 21.

The musical has been presented here every year since 1999, but this year’s production is presented on a bigger stage that gives more space to the spectacular dance sequences for which it has become famous.

For Korean pop music fans, the addition of Choi Sung-hee, the former lead vocalist of the girl group S.E.S. to the cast will be the main attraction.

Choi, who was known in S.E.S. as Bada, plays the leading role of Peggy Sawyer. And just like her character, a small-town girl fresh from Allentown, Pennsylvania, who dreams of dancing on Broadway, Choi is also hoping to add a new dimension to her career.

“Choi Seong-hee is an artistic brand for musicals while Bada of S.E.S. was for the entertainment business,” Choi said in a press release by CJ Entertainment. “I would rather have people think of me as a musical artist than an entertainer.”

In the musical, the young Peggy must overcome the jealousies of her biggest rival, the pressure of life as a chorus girl and the romance of a new relationship in order to be a star.

42nd Street, which is based on the movie of the same name, was only the second movie musical adapted for the stage. Its musical numbers reflect the style of master movie director Busby Berkeley (1895-1976), who was famous for choreographing elaborate sequences with intricate geometric patterns featuring a seemingly endless parade of women.

The musical won the Tony Award for Best Musical in 1981 and a Tony for Best Revival in 2001, among others.

This year’s Korean production has a more intimate feel than previous productions. The Charlotte Theater stage was designed specifically to accommodate musicals, with a short distance between the stage and the seats to enhance the audience’s experience of the sound and visual effects.

“The stage is so close to the audience that it is possible to read every little hand gesture and facial expression of each and every actor on stage,” said Kim Bu-kyung, a public relations manager at CJ Entertainment, which is sponsoring the production.

Since then, the production has built up a base of repeat visitors.

“It’s like a Nutcracker. There is a strong fan base and people still want to come and see the musical every year,” said Kim Bu-kyung, a public relations manager at CJ Entertainment, which sponsors the production.

“The charm of this musical is that you don’t need to know anything about it beforehand,” Kim said. Visitors are free to simply enjoy the singing, the dancing and the “Lullaby of Broadway.”