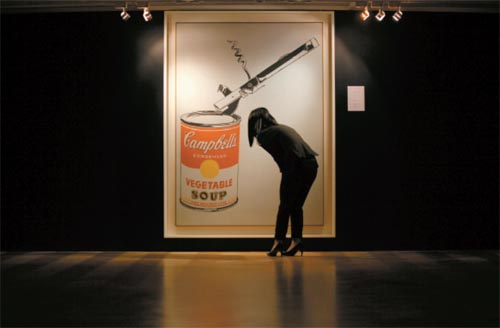 A woman looks at an artwork by Andy Warhol at a press preview of the Christie’s Impressionist and Modern Art Evening Sale in Hong Kong on Oct. 6. The Warhol piece is expected to fetch 30 million dollars to 50 million dollars. The sale will be on Nov. 10 in New York at Rockefeller Center. [AP]


NEW YORK - Less than two years after a precipitous fall, the art market is flexing its muscles again, emboldened by recent auction records and an influx of determined international collectors rich with cash.

With two works breaking the $100 million mark this year, auction houses Christie’s and Sotheby’s have convinced such owners of rare and never-auctioned fine art as Steve Wynn that it is a good time to sell - and reap tremendous profits.

Hordes of wealthy new buyers, ready to spend and anxious to build collections, are injecting life into a market hard-hit by the global financial crisis, experts said.

“The whole market has changed,” said Philip Hoffman, chief executive of The Fine Art Group, a London-based art investment house. “There’s a huge new group from six or seven countries who are shifting the market.”

New collectors from Russia, India, China and Hong Kong, and Mideast wealth centers such as Qatar and Abu Dhabi have made fortunes in oil, gas or commodities such as gold, he said.

“They are coming in with $100 million to build up their collections, and they want it built in one year,” he said.

Only one or two such buyers might have emerged at that level each year in the mid-1990s, and now there are 40 or 50, he said.

Christie’s nabbed three of the big estate sales, including that of Dennis Hopper, who died in May.

It is also offering such trophy pieces as Andy Warhol’s “Big Campbell’s Soup Can With Can Opener (Vegetable),” expected to fetch as much as $50 million. Its owner, Seattle collector Barney Ebsworth, recently said he had never sold any works before nor even considered it.

Sotheby’s has its own food-package Warhol, a Coca-Cola bottle expected to hit $25 million.

Henri Matisse’s “Back IV (Nu de Dos, 4 etat),” a monumental bronze and the first of the iconic series ever auctioned, is estimated at $35 million. Christie’s said its European owner recognizes the current tremendous market opportunity for modern sculpture.

“The confidence in the market is surely there,” said Marc Porter, chairman of Christie’s Americas. At the same time, he pointed to “hundreds of new buyers from regions of the world that have never participated before.”

“These guys are really new to the market,” Ryan said, referring to super-rich collectors from Russia, India, China and Hong Kong, and the Mideast.

“Culturally they’re huge gamblers and they love the action of the auctions,” he said.