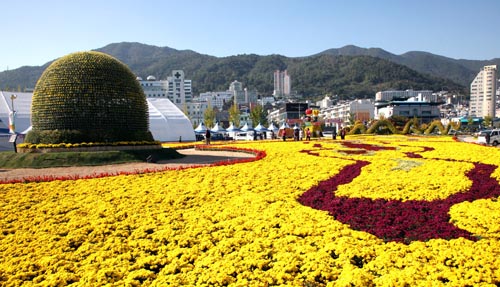 The Masan Chrysanthemum Festival, which runs through Sunday in the southern port city, celebrates the flower with exhibitions, food tasting events and folk games. See FESTIVALS, below. [YONHAP]

Today: Gustav Mahler (1860-1911) received harsh criticism for his Symphony No. 1 in D major, “Titan.” Ironically, it is now one of his most frequently performed works.

The piece will be played by the Seoul Philharmonic Orchestra, conducted by Jung Myun-hun. It is the third in the orchestra’s Mahler series.

Saturday: The love story of German composer Robert Schumann and Clara Wieck is well known. Schumann fell in love with his teacher Friedrich Wieck’s daughter Clara. In spite of opposition from her father, the couple eventually married, but Schumann died 16 years later at the age of 46.

Nov. 13: World-renowned classical guitarist David Russell is back in Korea after four years.

The program starts with a piece by French composer Francis Kleynjans. Russell will also perform his own arrangements of pieces by Fernando Sor, Louis Couperin and Johann Sebastian Bach.

Russell began playing the guitar at the age of 16 at London’s Royal Academy of Music and earned the title of most respected graduate.

Nov. 13: This Danish alternative rock band has recently gained fame in the United States and around Europe for their unique sound and the high-pitched voice of lead singer Jonas Bjerre. Expect to hear songs from their latest albums “And the Glass Handed Kites” (2005) and “No More Stories...” (2009).

Carreras was a member of The Three Tenors along with Placido Domingo and Luciano Pavarotti. His first performance in Korea was in 1979.

To Friday: Universal Ballet is presenting a performance of “La Bayadere,” which also happens to be the farewell performance for ballerina Lim Hye-kyung.

To Sunday: This Broadway musical by American composer Jonathan Larson is being performed with a Korean cast. Larson won a Pulitzer and two Tony Awards for his musical “Rent.” The musical “Tick, Tick... Boom!” is about an aspiring composer named Jon, who lives in New York in 1990. Jon’s friend wants him to join corporate America, while his girlfriend wants him to move to Cape Cod with her. But he doesn’t want to abandon the musical he’s worked on for the past five years and he has not yet given up faith that it will give him his big break. The story is autobiographical, as Larson himself had tried to establish himself in theater since the early 1980s.

To Sunday: Shakespeare’s last play “Edward III” will be performed for the first time in Korea by the Eurasia Shakespeare Theater Company.

To Nov. 9: The Wagon Stage company is presenting Moliere’s “Scapin’s Deceits,” which tells the story of the trickster Scapin and how he helps two young couples stay together. The tale is brought to life thanks to the actors’ acrobatics and the witty original script. This is the first time in 17 years that the play has been performed in Korea.

To Nov. 14: SPAF 2010 will feature a variety of breathtaking performances, including plays, dances and multimedia work by 28 groups from Russia, France, Switzerland, Belgium, Poland, Lithuania, Bulgaria and Korea.

To Sunday: The biannual contemporary art show in the southwestern city features photographic, installation and media works by about 120 artists from 31 countries. The title of the biennale is “10,000 Lives,” or “Maninbo” in Korean, after the epic poem by renowned poet Ko Un.

From Seoul, take a flight to Gwangju Airport or take the KTX to Gwangju Station.

To Sunday: Masan, a port city on the southern coast, is an excellent area for growing chrysanthemums because of its mild weather. Around this time of year, Masan Port blooms with 500,000 chrysanthemum plants. The festival includes an exhibit of chrysanthemum products, photo contests, folk games and tasting events of food and tea made with chrysanthemum flowers.

From Seoul, take a bus or KTX train to Masan bus or train station.

Friday to Nov. 14: About 10,000 lanterns from 20 countries will brighten Cheonggye Stream in central Seoul for this annual festival. The lanterns will be lit during a colorful ceremony at Cheonggye Plaza on Friday from 6 to 8 p.m. and will be displayed for the duration of the festival in five zones from Cheonggye Plaza to Samilgyo Bridge. Related programs include lantern-making and traditional Korean music performances. Guided tours will be provided in Korean, English, Chinese and Japanese.

Nov. 10 to 14: This festival is for bird lovers. Activities include cultural events and exhibitions, taking field trips to observe migratory birds up close and watching movies about birds. Guided bus tours will also be available.

The observatory (known as Tamjohoerang in Korean) is a corridor built on the embankment of the Geum River, and is the only park of its kind in Korea. Children can also learn about ecology at Napo Cross Fields, near the park.

From Seoul, take a train to Gunsan Station.

To Nov. 17: This showcase is focused on new media art. The 45 participating artist groups from 21 countries include famous names like British-American artist Sarah Morris. Among the Korean artists involved are Noh Sun-tag and Yangachi.