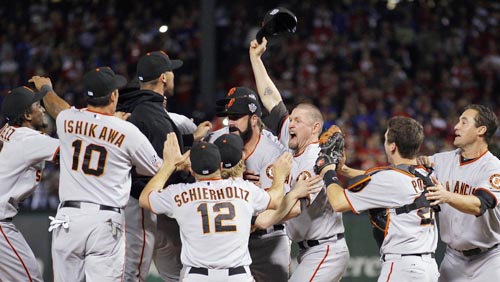 
ARLINGTON, Texas - Edgar Renteria hit a tie-breaking home run in the seventh inning as the San Francisco Giants won the World Series on Monday, beating the Texas Rangers 3-1 in a tense Game 5.

Tim Lincecum allowed just three hits over eight innings to help the Giants take the trophy home to San Francisco for the first time. It was an overdue victory - the Giants last won the World Series in 1954, four years before they moved west from New York. So much for a franchise that never quite got it done in October despite the likes of baseball giants Willie Mays, Barry Bonds and Juan Marichal. It’s November, and now new names stand tall in San Francisco.

Lincecum out-dueled Cliff Lee in an every-pitch-matters matchup that was scoreless until Renteria hit a stunning three-run homer with two outs in the seventh inning. Nelson Cruz homered in the bottom half, but Lincecum preserved the lead. The 5-foot-11 26-year-old with an unorthodox delivery beat Lee for the second time in a week. Lincecum, a two-time National League Cy Young award winner, struck out 10 batters. Brian Wilson closed for a save, completing a surprising romp through the postseason for a pitching-rich team that waited until the final day to clinch a playoff spot.

Manager Bruce Bochy enjoys calling his Giants a ragtag bunch. Maybe Cody Ross, Aubrey Huff and Freddy Sanchez fit that description. But the foundation of this club - for now, and for the foreseeable future - is totally home grown, built on a deep, talented and young rotation, a rookie catcher with huge star potential and their bearded closer.

Renteria reprised his role of postseason star. His 11th-inning single ended Game 7 of the 1997 World Series and lifted Florida over Cleveland.

A team seemingly free of ego did everything right to take the lead. Ross, the surprising MVP of the NL Championship Series, stayed square and hit a leadoff single, and Juan Uribe followed with another hit up the middle. That put a runner at second base for the first time in the game and brought up Huff - who led the Giants in home runs this year. But Huff didn’t swing away. Instead he expertly put down the first sacrifice bunt of his career.

Lee struck out Pat Burrell to keep the runners put, but Ross began hopping home as soon as Renteria connected, sending a drive that kept sailing and landed over the left-center field wall. And just like that, all the Giants’ past troubles seemed like ancient history.

The Giants won their previous title when they played in New York at the Polo Grounds in 1954 before moving to San Francisco four years later.

Trailing San Diego by seven-and-a-half games in the NL West on July 4, they meandered in the wild-card race until the stretch run, winning the division and finishing 92-70.

Come the playoffs, San Francisco posted a trio of one-run wins in the opening round that sent Atlanta manager Bobby Cox into retirement, then stopped the two-time defending NL champion Philadelphia Phillies in the championship series. Those wins, like this one, came on the road.

In the “Year of the Pitcher,” the World Series proved the oldest adage in the game: good pitching stops good hitting, every time. Lincecum and the team with the best ERA in the big leagues completely shut down Josh Hamilton and the club with the majors’ top batting average.

Texas became the latest World Series newcomer to make a quick exit. Houston (2005) and Colorado (2007) got swept in their first appearances, Tampa Bay (2008) stuck around for just five games. The American League champion Rangers became the first team since 1966 to get shut out twice in a World Series, with big hitters Josh Hamilton, Vladimir Guerrero and Cruz left to take half-swings or flail wildly.

The Giants earned their sixth title overall, joining the likes of Christy Mathewson, Mel Ott and John McGraw as champs, and putting them third with the Red Sox behind the Yankees (27) and Cardinals (10) for most titles. They also helped ease the gloating that blew from across the Bay, where the Oakland Athletics won three straight crowns in the mid-1970s and swept the Giants in the famous earthquake-interrupted 1989 Series.

San Francisco had come close before. Future Hall of Famers Willie McCovey, Orlando Cepeda, Mays and Marichal lost to the Yankees 1-0 in Game 7 in 1962. In 2002, Bonds and Co. led the Angels 5-0 in the seventh inning of Game 6 before letting that edge and Game 7 slip away.